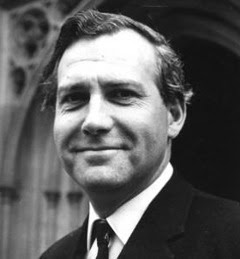 We finally have a new and stable Government in place armed and ready to reduce the deficit. As the new cabinet post holders are announced it is interesting to mull on who might impact on the world of insolvency. It seems as if Dr Vince Cable MP (Business Secretary) and Mr Ken Clarke QC MP (Justice Secretary) might have some sort of impact on the jurisdiction. Dr Cable sat on the last Parliament's All Party Parliamentary Group on Insolvency and in recent years he has been critical of the insolvency regime in the past. Will he call for reform? Similarly, as the Conservatives are now in power it will be interesting to see if they implement their recently mooted reforms to corporate insolvency. Watch this space!
Members of Parliament (MPs) have of course been connected to insolvency in different ways, i.e. not just in the policy and legislative sense. On occasion their contact has been much more practical. A case in point is that of Mr John Stonehouse MP (pictured). He has the unique privilege (for an MP) of appearing in the Peerage and MP Ledger on two occasions and like a previous sample (The Viscount Lucan) Stonehouse also disappeared for a time. Interestingly, Stonehouse's first entry in the ledger is directly opposite the Lord Lucan's entry. Let us examine Stonehouse and his ledger entries.
Mr John Thomson Stonehouse was born on 28 July 1925. Stonehouse was educated at Taunton Grammar School and the London School of Economics. A career Labour politician, Stonehouse became the Member of Parliament for Wednesbury from 1957 to 1974 and then for Walsall North. A seat he held from 1974 until 1976. He held ministerial office as Postmaster General between 1968 and 1969.
Stonehouse's trouble ostensibly began in 1974. He faked his own death in Miami, Florida, USA, on 20 November 1974. He then fled to Australia. In 1975 he was found guilty of fraud and was extradited from Australia to England. He resigned from the Labour Party in 1976. He died on 14 April 1988 from heart failure in Southampton, England. This was his fourth heart attack. In recent years it has been suggested that Stonehouse was a communist spy. Professor Christopher Andrew's Defence of the Realm seems to support this view.
The source of Stonehouse's impecunity is hard to fathom, but it almost certainly can be traced to the same business activities that resulted in his prosecution for fraud, theft, forgery and conspiracy to defraud. His second entry, as can be seen below, certainly relates to his criminal activity. His two entries in the ledger appear in the following form:
Entry One - entry 40

"MP for Walsall North - 2243 of 1975
Stonehouse, John Thomspn
"of 21 Sancroft Street, London, SE11, Politician"
Act of Bankruptcy/Alleged Petition
"non compliance before 22nd October 1975 with a bankruptcy notice."
Date of Filing petition
27 October 1975
Date of Receiving order or dismissal
15th December 1975 (crossed out)
4th March 1976 - receiving order
date of order or adjudication - 21st October 1976
No notification sent to the Speaker of the House of Commons as the Bankrupt has resigned and taken up appointment as a Steward of the Chiltern Hundreds."

"Petition no 1691 of 1976
Stonehouse, John Thomson
Politician of no fixed address, and lately residing at 21, Sancroft Street, Lambeth, London, SE11
Criminal Bankruptcy Petition filed 18th August 1976 pursuant to a Criminal Bankruptcy Order made at the Central Criminal Court on the 6th August 1976.
Date of Receiving Order - 5th October 1976
Date of Order of Adjudication - 23rd December 1976
No notification sent to the Speaker of the House of Commons as the Bankrupt has resigned and taken up appointment as a Steward of the Chiltern Hundreds."

Let us hope that none of the new MPs in the current Parliament end up in a similar pickle!
Picture Credit: http://www.nndb.com/people/856/000164364/john-stonehouse-1-sized.jpg