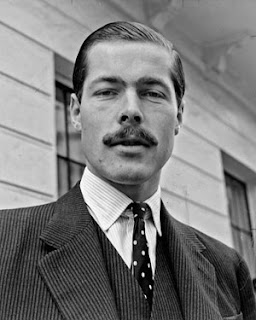 Following yesterday's blog entry on the recent long term loan of the Peerage and MP ledger and the Permanent Public Interest ledger from the Royal Courts of Justice we can now move to consider our first entry. One of the most remarkable entries is that which is contained in the Peerage and MP ledger for John, the 7th Earl of Lucan (1934-1999 - pictured) a man who was, "deeply interested in money, and craved all the accoutrements and veneer of wealth." (per Davenport-Hines). The Peerage and MP ledger entry includes the following information:

"Lucan, Richard John Bingham, Seventh Earl of...
Whose present residence is unknown and lately residing at 5 Eaton Row, London, SW1 of No Occupation.
Date of Filing Petition - 28 January 1975
Date of Receiving Order - 30 June 1975
Date of Adjudication - 20 August 1975
Act of Bankruptcy Alleged in Petition
"That with intent to defeat or delay his creditors he departed out of England on or about 8 November 1974 and being out of England remaining out of England with like intent or alternatively has with like intent departed from his dwelling house of otherwise absented himself with like intent to the date hereof."
Notice Sent to the Speaker of the House of Lords and the Clerk of the Crown in Chancery, 29 October 1975."

The source of Lord Lucan's impecunity which led to his eventual bankruptcy could be attributed to his gambling activity. As his ODNB biographer notes, "His domestic misfortunes took him into debt, and under the stress of his circumstances he began losing heavily at the Clermont and chasing his losses. ‘Aspers’ had sold the Clermont to Hugh Hefner's Playboy organization in 1972, and without his protection Lucan's debts became pressing."
If indeed Lord Lucan did flee abroad as the ledger suggests, it could be argued that it was not to avoid his creditors' claims, but to avoid prosecution at the Central Criminal Court for the murder of his children's nanny, Ms. Sandra Rivett. What evidence did the petitioning creditors have which suggested that Lord Lucan had gone abroad? The 7th Earl of Lucan was officially presumed deceased on or after the 8 November 1974 following a Chancery Division ruling made on the 11 December 1992. His son George, the Lord Bingham, could now style himself the 8th Earl of Lucan, although he cannot formally take the title or sit in the House of Lords following a 1992 judgment by the Lord Chancellor. Full probate was granted on 11 August 1999. The Countess of Lucan is the sole beneficiary of her late husband’s residuary estate.
Picture Credit: http://4.bp.blogspot.com/_BUOfb81B9EE/SwBeF4RaoQI/AAAAAAAABQQ/yJ8nv2riWIU/s400/lord+lucan.jpg