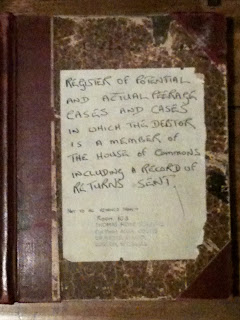 It has been remarked that Sir Francis Bacon (1561-1626), the father of insolvency compositions and so much more, suffered from an embarrassment of riches. With the recent acquisition of Professor Muir Hunter QC's entire working library of Cork papers (currently being catalogued by Dr Constantine Nana) we have suffered a similar fate of late here at Kingston Law School. This has now been compounded by a further long term loan of two incredibly important primary source documents. The Chief Bankruptcy Registrar has kindly lent the "Register of Potential and Actual Peerage Cases in which the Debtor is a Member of the House of Commons including a record of returns sent" (Pictured - hereafter "Peerage and MP Cases ledger") and a ledger which includes a "List of Files to be Preserved as Being of Permanent Public Interest" (hereafter "Permanent Public Interest Cases ledger") to the Law School. These are both incredibly important sources for the history of our subject. Over the coming weeks details from these documents will be examined and discussed here on the blog.
Destitute Dukes, broke Barons, cash strapped Countesses, monetarily challenged Marchionesses, impecunious Earls, valueless Viscounts, a Marquess who is lacking in means, bust Baronets, needy Knights, debtor Dames, and other Penniless Peers have been discussed on this blog before (see here). We can now go much further with our exposition of impecunious aristocrats and Members of Parliament as the Peerage and MP Cases ledger contains a wealth of information on bankrupt members of both Houses of the Palace of Westminster, beginning with the case of Lord Alfred Douglas and ending with Mr Neil Hamilton, a barrister, who once remarked, "If I am bankrupt, [which he was the following month] I won't be able to return to the bar but even if I was able to do so, I couldn't contain myself from saying what I thought to some of the judges."
This is an important area to consider, particularly in the current election climate, as bankruptcy can cause certain debilitations, including exclusion from sitting in the Legislature. In relation to the majority of the time period covered by the ledgers we must consider s.106 of the Bankruptcy Act 1914 which stipulated that:

The first blog entry drawn from the Peerage and MP Cases ledger will appear tomorrow. It will discuss Richard John Bingham, the 7th Earl of Lucan.