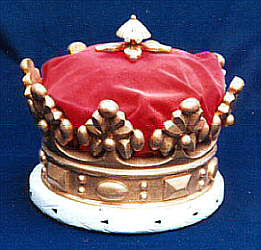 A number of aristocrats have had close contact with debt and the insolvency laws over time. Some members of the upper-chamber, and a number of baronets, have had cause to come to terms with their creditors over time. Some have also gone so far as the Bankruptcy Court. We will start with some debtor Dukes before we move on to the other ranks of the peerage (Duke, Marquess, Earl, Viscount, and Baron).
The 2nd Duke of Buckingham and Chandos, (Richard Plantagenet-Temple-Nugent-Brydges-Chandos Grenville: 1797–1861), was, according to his ODNB entry a "politician and bankrupt aristocrat" who had to endure the "humiliating spectacle of the great Stowe sale of August–September 1848, when over a period of forty days the entire contents of the house were auctioned. The duke was sold up ‘like a bankrupt earthenware dealer’ (The Economist, 938)." He was not the only Coronet wearing debtor. The sixth Duke of Newcastle (Henry Pelham Alexander Pelham-Clinton: 25 January 1834 – 22 February 1879) appeared before the Bankruptcy Court in 1870. His creditors were owed over £400,000. They accepted some 5s in the pound.
We now move to a lower level of aristocracy, namely, the Baronet level. Sir Thomas Beecham (second baronet: 1879–1961)), was one of the most popular English conductors of the 1920-1950s. He ran several opera companies and orchestras (including the Royal Philharmonic Orchestra) based on the reputation of the family firm (Beechams, now part of GlaxosmithKline). These events were not wholly successful in the early period and in 1919 he was declared bankrupt. A case which details the  further episodes of Beecham's life in insolvency is: In Re Beecham's Settlement, Johnson v. Beecham [1933. B. 2007.] [1934] Ch. 183.
It was not only holders of titles that had recourse to the insolvency laws, purveyors of honours also had recourse to the debtor laws. Maundey Gregory (1877–1941), the "honours broker" was of course not an aristocrat, but instead engaged in the sale of titles (Knighthoods cost about £10,000 and baronetcies £40,000). In 1934  he had a brush with the Bankruptcy courts. His financial problems are reported in: In Re Maundy Gregory (1935) Ch 65. Gregory was successfully prosecuted under the Honours (Prevention of Abuses) Act 1925. He received a sentence of two months and a fine of £50.
Picture Credit: http://www.geocities.com/noelcox/Ducal_Coronet.jpg