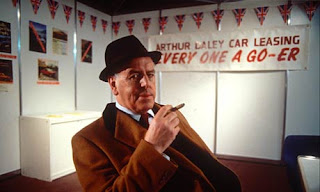 A health warning - I am not condoning anything that follows! The Irish Times have published a fascinating article that discusses ways of avoiding the effects of insolvency or the status itself. Mr Arthur Daley (pictured) might be proud of this dodgy menu of naughtiness! Some of the 'tips' hark back to a former age when keeping house, fleeing the realm, and fraudulent conveyances were de rigueur. Fortunately for creditors a number of statutory mechanisms now exist in England and Wales, and Ireland, to preclude the behaviour suggested in the article. I am not sure if the menu was published as some form of guide to defraud creditors of their just debts, or if it is some sort of general discussion piece. Either way it seems a strange editorial decision, particularly from a creditor's point of view. The story notes:

"...the scale of the assets of the former Anglo Irish Bank chief executive Seán FitzPatrick – from oilfields in Nigeria to investment portfolios worth millions – were revealed as his bankruptcy case was heard in court...
While insolvency practitioners emphasise that the point of bankruptcy is not to punish but to discharge people of their debts and let them continue with their lives, questions have nonetheless been raised about whether bankrupts are, or should be, left with nothing after the legal process.
Is it usually the case that they get to squirrel away enough money to keep themselves comfortable after their day out in court?
The key to survival, it seems, is to prepare for bankruptcy before the bailiffs come calling. Here are a few strategies for sidestepping insolvency.
DIVORCE
Yes, it might seem extreme, but divorce is one potential route for those looking to protect their assets (although, in practice, its use appears to be limited in Ireland). The idea is that a seriously indebted individual divorces their spouse, thereby passing on about half their wealth to their better half.
However, any move to divorce would have to be perceived as “genuine” by the courts. And there is always the possibility that once the divorce goes ahead, and your spouse receives all your assets, he or she will no longer be in the mood to share.
BIDE YOUR TIME
In Ireland you can choose either to be made bankrupt voluntarily or to be made bankrupt at the request of a creditor. With what are seen to be more progressive bankruptcy laws expected to be introduced by the end of the year, those in a position to choose when to go bust might look to postpone doing so until a new six-year regime is implemented (it’s currently a 12-year process in Ireland).
TRANSFER ASSETS
One of the simplest steps taken by those fearing bankruptcy is to transfer their key assets, such as the family home or the assets of companies they own, into the ownership of their spouse.
Another option, if a property is owned together with a spouse on a tenants-in-common legal basis, is to switch it to a joint-tenants basis, as this will make it more difficult for the courts to pursue.
In the case of Seán FitzPatrick, for example, it was revealed in court that his wife, Catriona, owns half of his Anglo Irish Bank-approved retirement fund, while the family home and other property are also in joint ownership.
In order to be able to transfer assets, however, you must generally own them outright. If there is a mortgage outstanding on a property, the bank or building society must give its permission for any changes, and if your situation looks somewhat compromised it is unlikely to do so.
Moreover, you are only entitled to move your assets around if you are solvent.
Once you are declared bankrupt the courts can look to reverse any transactions you may have made in the previous five years.
LEAVE THE COUNTRY
There is little doubt that this is a route being pursued by some individuals. Indeed, the flight of indebted property developers to more welcoming climes was criticised this week by the Minister for Finance, Brian Lenihan.
Faced with the prospect of a 12-year – or, possibly, soon to be six-year – bankruptcy process, many potential bankrupts are simply fleeing their debts and the lengthy legal entanglement that precludes them from taking on a position as a company director for its duration. By doing so, however, they are often leaving behind large parts of their wealth, in some cases departing with just enough cash to live on. Much of their property will be unsellable and will be seized by lenders following their departure.
For those fleeing, the benefit is that, while there is a common bankruptcy regime across the European Union, it doesn’t apply elsewhere. So it is more difficult for a court to have a claim over any money that is generated post-departure, while the ban on directorships may also not apply.
EVADE TAX
Taking a quick €10,000 in cash out of a company on a regular basis, and siphoning it into an offshore account, may keep some of a debtor’s money out of the bankruptcy courts. But the penalties if caught are significant.
GO ON A HOLIDAY
The UK is not just good for a quick shopping trip or a Premier League match. It is also an increasingly popular location for bankrupts, as it has far more lenient laws than Ireland. While those applying must show the UK courts that it is their “main centre of interest”, Irish nationals, if approved, can have bankruptcy discharged within a year under the UK system. Unsurprisingly, it is the route being chosen by many of those in financial strife."
Picture Credit: http://image.guardian.co.uk/sys-images/Arts/Arts_/site_furniture/2008/02/14/arthurdaley460.jpg