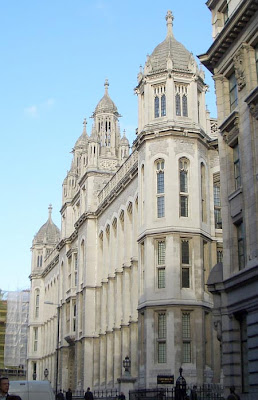 Sir John was the architect of the bankruptcy buildings on Carey Street that were partially destroyed by bombing during World War II. They were subsequently demolished in the late 1960s. The original building was put up in the 1890's some years after George Edmund Street's Royal Courts of Justice. The modern day St Thomas More building stands on the site of Sir John's work. He also designed the front of the Public Records Office on Chancery lane (now King's College London's Maughan Library - pictured), the Thames Embankment, Bow street police station and court, added elements to both the National Gallery and British Museum, as well as the Natural History museum. A flavour of what the Carey street building would have looked like can be garnered from the Maughan Library picture (right).
The phrase, "being on Carey Street" has, in some quarters, become a euphemism for being a bankrupt or being in debt. "Queer Street" has similar connotations. For details of some bankruptcy activity in the Carey Street bankruptcy courts in 1925 see here.
Professor David Graham QC has the following fond memories of the building:

"When I joined Muir Hunter as his devil in August 1958, I began to accompany him to the Bankruptcy court. In those days the court was situated in Carey Street. My recollection is that the original bankruptcy complex in Carey street had been constructed in the early 1890's and consisted of a large lengthy building stretching down towards the Strand.
The building, I believe, was largely destroyed by bombs during the war leaving what can best be described as a rump on Carey street. The entrance to the building was up a few steps. On the right hand side, on the ground floor, there was a large rectangular court specially designed for hearings in open court including public examinations and discharge applications. There were sections for the Official Receiver, members of the bar and also for the press.
The court, I think, was modeled on a previous bankruptcy court in Basinghall street. An illustration of an earlier court, about 1808 is available, as are other examples of how proceedings were conducted in the court towards the end of the eighteenth century.
In the Carey street buildings on the left hand side were two rooms where the Registrars sat in chambers. For several years I used to appear frequently in front of each of them, mainly,  Mr Registrar Cunliffe, Mr Registrar Bowyer, and Mr Registrar Berkeley. Each of them helped me to understand the finer points of insolvency procedure; I have fond memories of the three, but particularly of Morris Berkeley who was a great cricket fan. On 19th July 1968 I appeared before him in chambers and was delighted to begin my submissions with the announcement that my daughter, Angela, had been born that morning.
The upper floors of the building were occupied by the Official Receivers' department. A newly declared bankrupt was obliged to go to be interviewed by one of them at once on a preliminary basis. Several articles appear in magazines, such as the New Statesmen, during the 1960s describing the experiences of well known bankrupts in this gloomy old building. I seem to recollect that counsels' robbing room was non-existent and we were helped by  a friendly usher keeping our belongings in what was probably a broom cupboard. Chambers, were, I think, still heated by coal fires.
When it was decided to construct the St Thomas More wing of the law courts complex, the old Carey street bankruptcy courts were demolished. For about four years in the late 1960s the bankruptcy courts operated from a building in Kingsway aptly named "Victory House"; it had once I believed been used by the RAF.  The insolvency courts now in St Thomas More buildings became my regular stomping ground until the mid-nineteen eighties. I was never entirely reconciled to the loss of the layout and atmosphere of Carey street!"