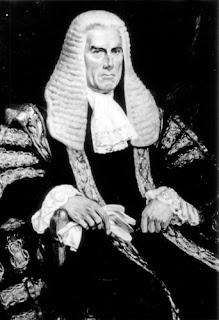 The Royal Borough of Kingston upon Thames, its long held and close connection with the administration of the law and equity, and the administration of the bankruptcy jurisdiction, have been mentioned on this blog before. We can now revisit Kingston upon Thames and the bankruptcy jurisdiction with the case of In re LOVE (J. W.). Ex parte THE OFFICIAL RECEIVER v. KINGSTON-ON-THAMES COUNTY COURT REGISTRAR. [No. 612 of 1949.] [1952] Ch. 138. The case is interesting for a number of reasons, not least because one of Kingston Law School's late visiting professors, Professor Muir Hunter QC, appeared for the trustee in bankruptcy.
The case concerned a critical examination of Section 40 (1) of the Bankruptcy Act, 1914, which provides that "where a creditor has issued execution against the goods or lands of a debtor … he shall not be entitled to retain the benefit of the execution …, against the trustee in bankruptcy of the debtor, unless he has completed the execution … before the date of the receiving order and before notice of the presentation of any bankruptcy petition by or against the debtor or of the commission of any available act of bankruptcy by the debtor."
The facts of the case are relatively straightforward; "On September 8, 1949, a debtor committed an act of bankruptcy by failing to comply with a bankruptcy notice. On November 11, 1949, a petition was presented. On December 14, 1949, a receiving order was made, and on January 5, 1950, the debtor was adjudicated a bankrupt. All these matters took place in the High Court."
How was Kingston involved? It is significant in so far as on October 10, 1949, judgment had been entered at Kingston-on-Thames County Court for the Ministry of National Insurance against the debtor for arrears. The total sum due £61 13s. 3d. The judgment continues, "On November 4, 1949, the registrar of the county court (who was also the high bailiff and so the officer in charge of executions) seized the debtor's household furniture under warrant of execution dated October 17, 1949. On November 15, 1949, he sold it for £101 15s. 0d., out of which he paid the judgment debt to the judgment creditor. By virtue of section 170 of the County Courts Act, 1934, he retained £10, the amount of the fines. There was throughout no knowledge of the earlier act of bankruptcy or of the proceedings commenced in respect of it. The Official Receiver having become the trustee in bankruptcy of the bankrupt, he asked the Minister to repay the sum of £61 13s. 3d., and this was done. He also asked the registrar to repay the sum of £10, but this was refused."
Danckwerts J.'s first instance decision ([1951] Ch. 952) was affirmed by the Court of Appeal which was made up of Lord Evershed M.R. (pictured), Jenkins and Morris L.JJ. Jenkins, LJ noted:

"The question is whether the execution effected in the circumstances mentioned was a valid execution as against the Official Receiver or was invalid, so that its proceeds should be considered as part of the estate of the bankrupt. The question turns primarily on the true construction of section 40 of the Bankruptcy Act, 1914. There is no doubt as to the completion of the execution in this case, and there is no doubt that the execution was completed before the date of the receiving order, and before notice of the presentation of any bankruptcy petition by or against the debtor, or of the commission of any available act of bankruptcy by the debtor. Prima facie, therefore, the circumstances in which this execution was levied and completed were such as to comply with the provisions of section 40 (1)."

The Jenkins , LJ then spent some time dealing with Hunter's arguments for the trustee in bankruptcy. He noted:

"The learned judge delivered a considered judgment, in which he discussed the question involved in this case very fully and carefully, and he came to the conclusion that there was nothing in the arguments addressed to him on the part of the Official Receiver to justify a departure from what he considered to be the plain meaning of section 40 (1). Accordingly, he dismissed the Official Receiver's application. I have come to the same conclusion, after giving the best attention I can to the careful argument of Mr. Muir Hunter to the contrary. I might well content myself with saying that I adopt the learned judge's reasoning and conclusions, but, out of respect for Mr. Muir Hunter's argument, I will endeavour to state briefly my reasons for not accepting it.
Mr. Muir Hunter's argument is on these lines: He says that the fundamental principle of the bankruptcy law, as demonstrated by sections 37 and 38 of the Act, is that the commencement of a bankruptcy relates back to the date of the act of bankruptcy on which the petition is founded, and the vesting provisions of the Act operate accordingly."