The Law and "Royal and Ancient" Kingston upon Thames throughout history - a special place in the legal world! 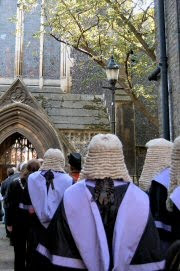