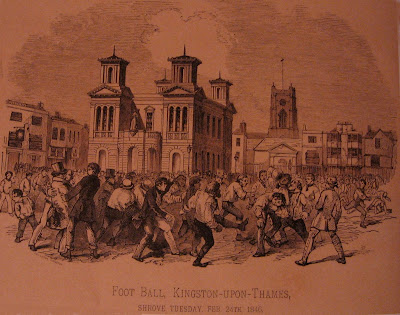 I have mentioned Kingston upon Thames (pictured in 1846) and the bankruptcy jurisdiction on this blog before. I can now return to the dual subjects, and some surrounding environs, due to the case of Gascoigne v. Gascoigne [1918] 1 KB 223. The case concerned a husband who took a lease of land in his wife's name and built a house on it with his own money. The bungalow was built on “certain land at Thames Ditton in her name." The husband used his wife's name in the transaction with her knowledge and connivance because he was in debt and was desirous of protecting the property from his creditors. As Lush, LJ noted on appeal in relation to the first instance decision which was made given in Kingston County Court: "His findings of fact must be taken to mean that the plaintiff, with his wife's knowledge and connivance, concocted the scheme of putting his property in her name, while retaining the beneficial interest, for the purpose of misleading, defeating, and delaying present or future creditors
There was a subsequent action by the husband against his wife for a declaration that she held the property as trustee for him. Having regard to the fact that the relationship between them was that of husband and wife, the presumption was that the conveyance was intended as a gift to her. There was therefore no resulting trust in his favour according to his wife. The presumption of a resulting trust was rebutted by the presumption of advancement.
As the judgment notes, “The only fact relied on by the plaintiff as tending to rebut that presumption was that of the above-mentioned scheme to defeat his creditors." Lush, LJ noted: "“His reason for putting forward his wife's name was that he had run into debt and had borrowed from money-lenders “To raise the wind; to get out of a hole.” The Lord Justices of Appeal (Lush and Lawrence, LJJ) held that: “he could not he allowed to set up his own fraudulent design as rebutting the presumption that the conveyance was intended as a gift to her, and that she was entitled to retain the property for her own use notwithstanding that she was a party to the fraud.”
A more recent case on a similar debt and resulting trusts theme can be seen in: Abrahams v. The Trustee of the Property of Abrahams [2000] WTLR 593. The case involved a wife purchasing two 15th shares in a syndicate lottery ticket. It was held that as she was the true purchaser the beneficial interest should result to her. The share therefore resulted to the wife as against the Trustee in Bankruptcy.
Picture Credit: http://upload.wikimedia.org/wikipedia/commons/0/0f/Footboll_in_England_1846.jpg