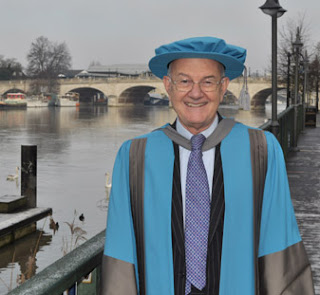 This post has nothing to do with insolvency law and policy but contains a piece of recent happy news from my Law School. I have discussed Kingston Law School (KLS) and Kingston-upon-Thames and their respective long contributions to the administration of justice on the blog before. Developments continue in this regard. The Law School has awarded a number of honorary doctorates in the past, perhaps most notably to insolvency expert Dr Hamish Anderson of Norton Rose LLP. Last week the University gave an honorary doctorate to the Lord Judge, the Lord Chief Justice (pictured). My colleague takes up the story:
"The head of judiciary in England and Wales has attended a ceremony at Kingston University in South West London to become an honorary doctor of laws.
The appropriately-named Igor Judge became Lord Chief Justice in October 2008 since when he has shown a determination to stand up for judicial independence and developed a reputation for taking a close interest in 'grass-roots justice'.
Accepting his award, the Lord Chief Justice told Kingston's graduating students that although times were tough in the job market, passion and perseverance were key to success. "The best advice I can give to anyone who wants a career as a barrister or solicitor is that, if you want it enough, you must do everything you can to achieve it," he said. "Not to have tried for something you really want is a recipe for regret."
Lord Judge is regarded within the judiciary as 'a judge's judge'. "Despite everything he has achieved, Lord Judge has a reputation for being very approachable," the Head of Kingston University's Law School, Professor Matthew Humphreys, commented. "Even when he was Deputy Lord Chief Justice, he was known to attend ordinary Crown Court hearings so he could keep in touch with day-to-day judicial proceedings. I hope that - however successful they prove to be - our students remain similarly level-headed."
The Lord Chief Justice received his award at a ceremony at Kingston's Rose Theatre, alongside more than 400 students collecting degrees and other academic awards from the University's Faculty of Business and Law.
Lord Judge was called to the bar in 1963, became a Queen's Counsel in 1979, a High Court judge in 1988 and an Appeal Court judge in 1996. He served as Senior Presiding Judge for England and Wales from 1998 until 2003, when he was made Deputy Lord Chief Justice.
In 2008, he marked his appointment as Lord Chief Justice with a speech in which he expressed concern about the impact of the internet on the jury system - following a case in which a juror used a smartphone to read a report of the rape case he was hearing. He also said that many of the web-generation lacked the attention span to be effective jurors. In another speech the following year, he criticised the Ministry of Justice for passing "too many laws".
Picture Credit: Kingston University, 2011.