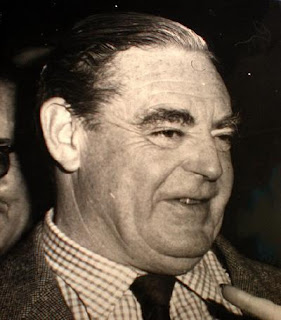 There are a number of entries for ladies in the Peerage and MP Ledger which did not really need to be entered, at least for the purposes of s.106 Bankruptcy Act 1914. This is because the ladies' titles were either acquired through marriage or because they were courtesy titles, again through marriage, but also as the off-spring of those individuals (their fathers) who were entitled to attend and vote in the House of Lords. Perhaps the best example of this is Janine Angela Josephine Greville (nee Detry de Mares), the Dowager Countess of Warwick.
Janine de Marès is the daughter of Georges Detry de Marès. She married Charles Guy Fulke Greville, 7th Earl of Warwick (pictured), son of Leopold Guy Francis Maynard Greville, 6th Earl of Warwick and Elfrida Marjorie Eden, on 25 November 1963. This was the 7th Earl's third marriage. Following the marriage, on 25 November 1963 Janine de Marès was styled as the Countess of Warwick and her married name became Greville.
Janine, Countess of Warwick's entry in the ledger states (for her entry in the London Gazette see here):

"Warwick 259/96
Janine Angela Josephine Greville (nee Janine Angela Josephine Detry de Mares) also known as the Countess of Warwick -
Bankruptcy Order 14th March 1996
Flat 14, 22 St James's (sic) Square London SW1Y 4SH
Telephoned Jan Denye at Crown office on 15th March 1996.
The above is the widow of the 7th Earl and not entitled to sit or vote in the House of Lords (her son Guy is) - certificate not necessary."

The current Earl is Guy Greville, 9th Earl of Warwick. Janine is his stepmother. There is no evidence on record for why the Countess found herself in the High Court being declared bankrupt. In due course I will discuss some of the other courtesy title entrants, as well as entrants whose titles were/are not of the Realm of Great Britain! This is interesting not only for its own sake but also against the current backdrop of Sarah, Duchess of York's current financial and other issues. The Duchess has opined that she is considering bankruptcy. The recent dissolution honours may also contain a future debtor or two!
Picture Credit: http://thepeerage.com/052558_001.jpg