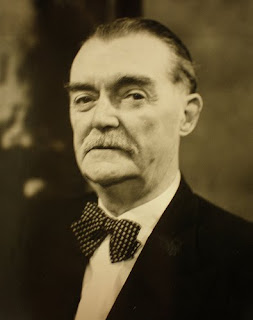 Richard, the 2nd Earl Lloyd-George of Dwyfor (pictured: 1889–1968), the son of David Lloyd George (the Liberal MP and wartime Prime Minister for whom the Earldom was created), appears in the Peerage and MP Ledger. Richard was born on 15 February 1889. He married Roberta Ida Freeman McAlpine, daughter of Sir Robert McAlpine. He and Roberta were later divorced. He then married Winifred Emily Peedle. He died on 1
May 1968 at age 79. He was suceeded in the Earldom by his son Owen Lloyd George, 3rd Earl Lloyd-George of Dwyfor (b. 1924). The heir apparent is the present holder's son by his first marriage David Richard Owen Lloyd George, Viscount Gwynedd (b. 1951). The second heir apparent is Lord Gwynedd's son the Hon. William Alexander Lloyd George (b. 1986).
According to the ODNB Richard portrayed his father as an over-sexed philanderer. Unfortunately little remains in the historical record on Richard himself (save for the above). This makes the ledger entry all the more important. His entry in the ledger (at page 35) notes: