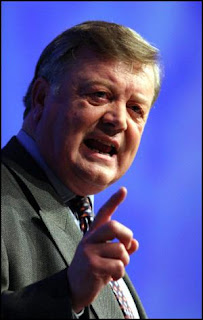 The Right Honourable Mr Kenneth Clarke QC MP's (pictured) department (The Ministry of Justice) have published some interesting new statistics on insolvency court usage for the first quarter of 2010, i.e. the number of bankruptcy and winding up petitions issued in the High Court and County courts in England and Wales. This is of course different to the statistics for adjudication in those courts, i.e. the number of bankruptcy and winding up orders made. See here for Insolvency Service statistics on this second interesting set of figures.
In outline the Ministry of Justice figures show that in the first quarter of 2010 the following number of petitions were issued:

The Ministry of Justice also mull on some recent changes to insolvency law that may have affected the figures. They note:

Fees relating to The Official Receiver’s Deposit towards the costs of administering insolvency cases increased on 6th April 2010;

This created an incentive for companies and individuals to present petitions to the courts before 6th April and may therefore have resulted in the increase number of petitions being made in Q1 of 2010 compared to recent quarters.

Debt Relief Orders (DROs) were introduced on 6 April 2009 through the Tribunals, Courts and Enforcement Act 2007. DROs provide debt relief, subject to some restrictions, and are suitable for people domiciled in England and Wales who do not own their own home, have little surplus income (no more than £50 a month), assets (other than possibly a car) not exceeding £300, and less than £15,000 of debt. As DROs offer an alternative route into personal insolvency, they are likely to have had a downward impact on the number of bankruptcies."