Peerage and MP ledger: the 2nd Earl of Halsbury, barrister, recorder of Carmarthen, and bankrupt 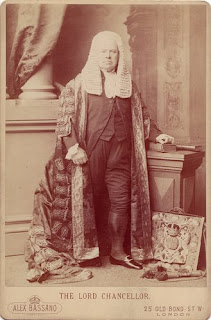 Hardinge Goulburn Giffard, the 2nd Earl of Halsbury (1880–1943) is a particularly interesting entry in the Peerage and MP ledger. He was a barrister and recorder of Carmarthen. One commentator has noted that he was, "a struggling lawyer...a stern disciplinarian and had an intimidating presence" (Lindsay). This view is of course all the more interesting when one considers that his father was Hardinge Stanley Giffard, 1st Earl of Halsbury (1823–1921 - pictured) the famous Lord Chancellor whose, "short legs accentuated his dumpy and pugnacious appearance." (ODNB). In addition to editing the famous Halsbury's Laws of England, the 1st Earl had three children, Hardinge Goulburn (1880–1943); Lynie May Rohais; and Constance Mary Evelyn. The eldest child makes up the subject matter of this blog entry.
Debt seems to have been a preoccupation of the 2nd Earl of Halsbury throughout his lifetime. This may seem curious on the face of it particularly as he inherited £25,009 11s. 6d in 1921 (in addition to the Earldom) when his father passed away. This was not an insubstantial sum at the time. Some would argue that it is not now! However, something seems to have gone wrong for the 2nd Earl. Unfortunately little information survives on him or the state of his personal finances when he was Viscount Tiverton or the 2nd Earl of Halsbury. Certain questions arise from what does survive. Did he accrue over-indebtedness whilst he was Viscount Tiverton in the hope that when he inherited he would be able to discharge his liabilities? Were his skills as a barrister not as great as his father? What other misfortune affected him? Unfortunately few records survive which help to reconstruct the life of the 2nd Earl of Halsbury. At least one record does however survive. This document is discussed below.
The problem of debt cascaded down the generations. The 2nd Earl once told his own heir, Viscount Tiverton (who became the 3rd Earl), that ‘You will need money to lead the life you have been brought up to, and science will never bring you anything on that scale." (Lindsay). Viscount Tiverton was attempting to obtain a scholarship from Eton to Oxfrod to further his scientific ambitions. His father, the 2nd Earl, wanted him to be an accountant. He followed this path for a short period beginning articles at Deloittes.
The debt problems did not improve for the 2nd Earl who faced, "a declining legal practice and faced approaching bankruptcy." (Lindsay). He faced more than that. This is evidenced by an entry in the Peerage and MP ledger which notes:

Things did not improve for the 2nd Earl following his bankruptcy. As his son's biographer notes:

"In 1943 the news had arrived that his father, the 2nd Earl of Halsbury, had died in a

civilian internment camp in German-occupied France. When the Germans had taken Paris, he

had gone into hiding and could only feed himself by selling his clothes; he was barefoot when

rounded up by the authorities. A fellow internee later reported that Halsbury had been the

saddest man in the whole camp and just used to stand by himself all day, unspeaking, gazing

out at the horizon. When his health started to fail he was shifted to a hospital in the Vosges,

War I when all went well for him. There he died and was buried in the common grave.

It was thus that Tiverton inherited the title of 3rd Earl of Halsbury, although there was

nothing else to inherit." (Lindsay).