Britain as a Bankruptcy Brothel according to the Times: The IS as brothel keeper and IPs as harlots? 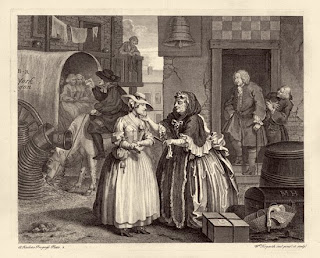 An interesting piece has been published in the Times (not least because of the feedback comments). The article is entitled: " Abuse of pre-pack deals ‘could turn Britain into an insolvency brothel’" I am sure my practitioner blogger colleagues will have some things to say on this article as well as my academic colleagues who have an interest in the subject (i.e. Professor Finch, Dr Frisby and Dr Walton).
The article does raise an interesting point. If Britain is to become an insolvency brothel does that make the Insolvency Service (IS) a modern day brothel keeper in the vein of Hogarth's Harlot's Progress? (pictured) Also, is it the Insolvency Act 1986 or the Insolvency Practitioners (IPs) who administer the procedures that are the practitioners of ill repute or the facilitating brothel keepers? Answers on a postcard (or comment box!).
Either way the article does raise an interesting point about abuse of the English and Welsh insolvency system (the article uses the term bankruptcy in the American sense for some reason). An early bankruptcy case might prove instructive. In Re A Debtor [883 of 1927.] [1928] Ch. 199, Lord Harnworth MR noted:

It seems some foreign commentators already feel English and Welsh insolvency laws have been brought into disrepute. On the home front Professor David Graham QC has had two letters in the Times on this very subject in recent years. Whilst we can be pleased that a species of reverse Delaware effect is occurring, we do need to ensure that those with responsibility for showing how effective and well managed English insolvency laws are (i.e. the Insolvency Service and R3) are able to rebut any spurious allegations that are ill-informed and misguided.
Picture Credit: http://contexts.org/economicsociology/files/2009/01/a_harlots_progress_plate1.jpg