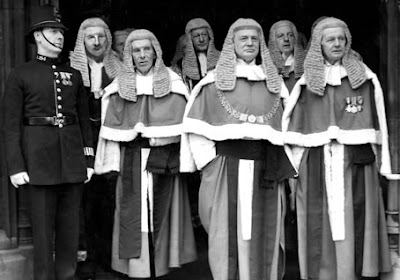 Today is Armistice Day. It is a day on which we remember the great sacrifice, throughout the ages, of our war dead and all those who have died in times of conflict. I thought it might be appropriate today, instead of posting on insolvency issues, to remember some of those legal figures who have also had illustrious careers in the Armed Services. Dr Johnson once observed that: "Every man thinks meanly of himself for not having been a soldier, or not having been at sea." Boswell retorted: "Lord Mansfield does not." Johnson then stated: "Sir, if Lord Mansfield were in a company of General Officers and Admirals who have been in service, he would shrink; he'd wish to creep under the table."
The following men have the distinction, not shared by the Lord Mansfield of serving with distinction in both disciplines:
Sir Tasker Watkins VC GBE PC - Court of Appeal judge who won a Victoria Cross
Sir Tasker was a Court of Appeal judge who also won the Victoria Cross (obituaries in The Times, The Telegraph, The Independent, the BBC). As his Times obituary notes he won the VC for two acts of courage. The entry notes:
"The break-out southwards by the British 2nd Army began on July 18 with the gap between Falaise and Argentan as a key objective. This was to prevent the enemy using that route for reinforcement, once he realised that an Allied landing in the Pas de Calais area was no longer a threat. By August 12 the enemy had begun to pull back from around Mortain, but were fighting stubbornly and skilfully to stand their ground in the Falaise-Argentan pocket.

On August 18, 1/5th Battalion of The Welch Regiment was ordered to seize a series of local objectives along the railway at Bafour, near Falaise. It was still an hour until dusk as they crossed the start line, and German Spandau machineguns, sited beyond the standing corn, were soon inflicting casualties. The advance was held up when a German 88mm gun engaged the infantry’s supporting tank squadron.

As the only unwounded officer left in his company, Lieutenant Watkins took command and, with only short-range fire support, led charges on two of the enemy posts in succession, personally killing the occupants with short bursts of his Sten sub-machine-gun. On reaching the second objective, he found a German soldier manning an antitank gun but his Sten jammed when he tried to shoot him. Swiftly throwing the weapon in the man’s face, he drew his revolver and killed him before he could recover from the shock.

Having captured his objective, Watkins found he had only 30 men with him when the enemy counter-attacked with a scratch force of 50 infantry. He directed the fire of his men against the enemy and, as soon as they faltered, led a bayonet charge from which only a handful of the enemy escaped. Unknown to him, because the company radio had been damaged during the action, the battalion was at that moment ordered to withdraw.

Initially, Watkins prepared to hold his hard-won position but, as darkness fell, it became clear that his remnant of the company were alone and in danger of being surrounded. He therefore decided to rejoin his battalion by passing round the enemy’s flank. But while making their way back through the cornfields he and his men were challenged by an enemy post a few yards distant.

Shouting to his men to scatter, he charged the post alone with a Bren light machinegun and killed the occupants. He then led his remaining soldiers back to battalion headquarters. The following day the enemy pulled his tanks out of the Falaise pocket, leaving only infantry to cover their withdrawal.

Watkins was confirmed in command of his company and promoted captain. On September 22 he was appointed acting major. Perhaps not surprisingly in view of his aggressive attitude, he was wounded in action in the Netherlands on October 27 and evacuated to England. He received the Victoria Cross from King George VI on March 8, 1945, and was released from active military service on May 28 the following year."

Sir Kenneth Hollings MC - the High Court judge who won a Military Cross
As his Telegraph obituary notes, the Cambridge educated High Court judge, Mr Justice Hollings, won his MC whilst serving as a Captain in the Shropshire Light Infantry in the Second World War. The circumstances were as follows: "In 1944, south of Arno in Italy, Hollings's party was fired on over open sights by a German self-propelled gun. Placing his party under cover, Hollings rode off on his motorcycle – under fire, and with a wireless set on his back – to find a good vantage point. From his new position he directed fire on to the self-propelled gun, knocking both it and a Tiger tank out of action; he was later awarded an MC."
Sir Edward Milner Holland CBE QC (1902–1969) - chancery barrister, chair of the Bar Council, head of 7 New Square - the leading chancery set of the day.
As his ODNB entry notes Milner Holland was awarded a CBE for his services in the field during the Second World War. The entry notes: "Following the outbreak of war he joined the Royal Army Service Corps as a second lieutenant and he served in the army until 1945. In 1943 he became deputy director of personal services at the War Office with the rank of brigadier, and in that capacity he was heavily engaged in the negotiations with the Treasury concerning army pay, allowances, and pensions. In recognition of his services in this field he was appointed CBE in 1945."
For one remarkable and extremely significant year Professor David Graham QC had the great good fortune to occupy the pupils' room adjoining that of Milner Holland. He got to know this great chancery lawyer extremely well and many years later was fortunate to be led by him in relation to a complex equity matter. David remembers Milner Holland as the most friendly man at the bar. The clerk of 7 New Square, Jagot, was extremely well know at the time and used to reminisce about those who did not return.
Sir Valentine Holmes QC (1888–1956) - libel barrister
During the First World War Holmes served as an officer in the Royal Artillery. He did not fight in the Second World War but maintained his practice in London. As his ODNB entry notes: "Before the Second World War he worked from 9 a.m. one morning until 1 a.m. the next. During the war he worked from 3 a.m. until 6 or 7 p.m.—and firewatched as well. Holmes cannot qualify for the shortest judgment competition which this blog has been running for some time, but he might qualify for the shortest opinion. As his ODNB entry notes: "His opinion in one case was thirteen words long—‘The judgment of the Court of Appeal is wrong and will be reversed’ (private information, Lord Bridge): and so it was."
Professor Sir Robert Yewdall Jennings QC (1913–2004) - sometime Cambridge fellow and Whewell professor of international law
As his ODNB entry notes: "in 1940 Jennings duly found himself recruited into army intelligence. A good deal of the work, which appealed to him, involved the study of maps and aerial photographs, leaving him in turn with a fascination for the geographical which later came into play in his studies of territory and boundary disputes in international law. The work was centred in Oxford, which gave him the opportunity to eat his dinners at Lincoln's Inn and to get called to the bar in 1943 (although nothing like a legal practice developed until much later). A short final period of military service abroad, in India and Ceylon, preceded his demobilization in 1946, with the rank of major. It was then back to Cambridge, to his fellowship at Jesus and a university lectureship."
Professor Lord McNair CBE (Arnold Duncan McNair, first Baron McNair -1885–1975) - Cambridge Don, jurist and judge, sometime Whewell chair in international law at Cambridge
During the First World War he served under the coal controller and was gazetted CBE in 1918. He wrote, inter alia, Legal Effects of War (1920; 4th edn, 1966).
Other links with the law and war
A number of learned authors have mentioned war, or remembered war dead in their work. Writing in 1920 Justice Salmond, a judge of the Supreme Court of New Zealand, dedicated his book on torts (Salmond, J. The Law of Torts: a treatise on the English law of liability for civil injuries. Sweet & Maxwell, London, 1920) to his soldier son. He wrote:

"To THE MEMORY OF

Finally, the sometime Vinerian professor of English law at Oxford University, Professor Geoffrey Cheshire, had a son who won a VC. He was Wing Commander Leonard Cheshire VC.
Picture Credit: http://www.nationalarchives.gov.uk/cabinetpapers/images/cabinetpapers/he8a01-0253194-main.jpg - High Court judges at the opening of Parliament in 1946 - The judge on the far right is wearing his campaign medals.