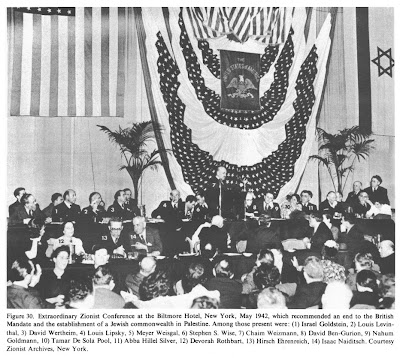 Judge Louis Levinthal (1892-1976 - pictured back row third from the left), lawyer, Zionist politician and communal leader, has been mentioned on this blog before (see here). Following a recent trip to America, Professor David Graham QC is now able to expand the story of this giant of bankruptcy scholarship.
More than ninety years ago, in 1918, an article entitled, "The Early History of Bankruptcy Law" was published in the University of Pennsylvania Law Review ([1918] vol.66, pp.223-250). The author of this fascinating comparative study was Louis Edward Levinthal who at the time was about twenty six and a member of the bar in Philadelphia.
David has for many years wanted to know who Levinthal was and how he was able to produce such a valuable article which included, in particular, information regarding medieval Jewish insolvency law and how bankrupts were treated in eighteenth century Lithuania. Thanks to the help of the Jenkins Law Library, also in Philadelphia, he is now able to discover some of the background.
Born in 1892, Levinthal was brought up in a strictly orthodox Jewish household. His father, who had recently emigrated from Lithuania, was a distinguished figure in his local community as well as on the national scene. He was not only a fervent advocate for Jewish education but was also a keen Zionist. He was the only Rabbi to attend the Paris peace conference as part of an American-Jewish delegation.
Levinthal's first article appeared in 1916 in the American Bar Association Journal, at page 182; it is entitled, "The Land Law of Turkey." It was almost certainly written at a time when many Jewish organisations and individuals were keen to acquire land in Turkish-controlled Palestine.
Levinthal already demonstrates in this article his scholarly legal talents, referring to a wealth of published material in various languages on the subject. His concluding two paragraphs are, to say the least, prescient. He observes:

"In 1913 a series of provisional laws... provided for a general survey and revaluation of all lands in the [Turkish] Empire together with a readjustment of taxes. They also extended the right of inheritance and modernised the hypothecation as security for debts.
It is questionable whether such attempts a reform can have the desired effect. They are, it is estimated, more likely to confuse the land system of Turkey, just as the existing complications in the Turkish civil, criminal and commercial courts were caused by successive attempts at modernisation. The truth is that a truly comprehensive land code, embodying and co-ordinating the whole of the existing laws of real property in a single statute, would be a great achievement. But this is more than can be expected.
The reform that is needed and can be attained is a general and far reaching improvement in the administration of the laws. The impression of arbitrary action on the part of the officials and the removal of financial abuses would be of real and substantial value. A reform of methods, rather than of law, is required for the reconstruction of the Turkish agrarian system."

Lou, as he was familiarly known, took top honours in his undergraduate law course at the University of Pennsylvania and went on to do postgraduate work. It is quite probable that his two bankruptcy articles were the result of his masters dissertation. Following a successful career at the Philadelphia bar, he was appointed in 1938 a judge of the newly created local Court of Common Pleas and he served there with great distinction for about twenty years.
Despite his legal commitments Lou managed to find time to serve for two years in the early 1940s as President of the American Zionist Organisation as well as performing many other communal duties. Most notably he presided at a crucial Zionist conference at the Biltmore hotel in 1942 in New York (pictured) where a more proactive policy regarding the need to establish a Jewish state was adopted. Amongst the celebrated personalities at the meeting were Chaim Weizmann, the first President of the State of Israel and David Ben-Gurion, the first Prime Minister of the State. After the war Levinthal was attached to the American commander in Germany and together with Mrs Levinthal spent much time with the camp survivors.
On his return to Philadelphia one of his colleagues on the bench was moved to write an appreciative analysis of Levinthal's qualities as a judge: "...he manages to be a very wise man without being primarily a scholar, and that is the best kind of wise man to be. He seems to have been born legal, and wise and ancient as well, and to have known what the law was before he ever studied the details; the result is a perfect balance of instinct, and knowledge that I have ever seen."
After retiring from the bench, Levinthal and his wife finally settled in Israel. For several years he served as chairman of the board of governors of the Hebrew University. David is immensely grateful for having had the opportunity to discover, through the two bankruptcy articles, the life of Levinthal, described by his brother judge, as "a good man."
Much information about Levinthal and his family can be found in the 2008 edition of the Encyclopedia Judaica and other sources including a brief obituary in the New York Times. The appreciation by his brother judge, Curtis Bok, was published in the Philadelphia periodical, The Shingle magazine, in March 1948, vol.XI, no.3, at page 51. This article also contains a picture of Levinthal.
Picture Credit: http://www.geschichteinchronologie.ch/USA/EncJud_juden-in-USA-d/EncJud_USA-band15-kolonne1633-1634-zionistenkongress-Biltmore1942.jpg