HOBS: Poulson (1) - some snippets from the Hunter Collection - Three insolvency barristers in Wakefield 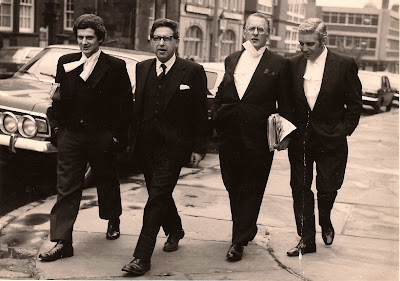 As previously noted, the Poulson papers in the Hunter Collection at the Muir Hunter Museum of Bankruptcy are now being catalogued. Over the coming weeks I will, in tandem with Professor David Graham QC, add some snippets to this blog from the case and materials from the Hunter Collection that provide an insight into corruption in the government of Edward Heath and the workings of the bankruptcy laws of the 1970s, a decade or so before the great reforms of 1986. As previously mentioned the materials are going to be used as part of a doctoral funding bid to the AHRB or ESRC. If you are interested in undertaking work of this nature please email me.
Now to the materials. The place is Wakefield, England. The year is 1972. The learned gentlemen leaving one of the hearings of Poulson's public examination are, from left to right, (as they then were): Mr Michael Crystal (DG's pupil at the time), Mr David Graham (DG), Mr Muir Hunter QC, and Mr Leonard Saffman, Poulson's solicitor. Why were they there? Briefly stated the Poulson case can be summarised in the following manner; Poulson had built up a substantial architectural practice based in Wakefield. A considerable proportion of the practice's work involved commissions not only in the United Kingdom but in many other parts of the World.
Poulson at the beginning of 1972, under pressure from various creditors, presented his own petition in the local county court in bankruptcy. John Preistley, an experienced insolvency accountant, was appointed Trustee in Bankruptcy and he instructed Desmond Simpson of RC Moorhouse to act on his behalf. Poulson's affairs had already received some attention in the Bradford Telegraph and Argus and gave rise to adverse scurrilous comments in Private Eye. It soon became apparent to the Trustee that Poulson's activities often involved corrupt payments to facilitate obtaining work. Local commissions including hospital and coal mining projects had been obtained in this way as well as work in the North East and Scotland. Pouslon to this end paid sums of money, often substantial, to prominent figures such as William Pottinger, the permanent under-secretary at the Scottish Office in Edinburgh and to T.Dan Smith, know at the time as 'Mr Newcastle".
The Trustee in Bankruptcy quickly identified many of these payments and Muir Hunter was instructed to seek information about them from Poulson at his public examination, which in those days still remained an important feature of bankruptcy proceedings. Here is a sample exchange between Muir Hunter (MH) and Mr John Garlick Llewellyn Poulson (JGLP):

MH: "now, it is plain, is it not, Mr Poulson, that you are a man with an immensely generous heart: is that not right?"
JGLP: "I used to think so. I think now, when I see these figures, 'stupid' would describe it."
MH: "Yes, stupidly generous. So the situation was this, was it not, that you were prepared to lash out large permanent regular sums to your old chums?"
JGLP: "I didn't know they were old chums: some of them I had never even met"

In the course of the proceedings it also emerged that Poulson had used, through one of his companies, the services of Reginald Maudling, a former Chancellor of the Exchequer and at the time of Poulson's bankruptcy serving as Home Secretary in Edward Heath's government. As the proceedings progressed and received a vast amount of media publicity, the government became concerned about the potential repercussions and attempts were made, including a complaint to the Bar Council about the manner in which Muir Hunter was conducting the hearings. A recent biography of Reginald Maudling (Baston, L. Reggie: The Life of Reginald Maudling. Sutton Publishing. 2004) makes use of fascinating Cabinet material, available in the National Archives at Kew, to demonstrate the lengths to which the Prime Minister's assistants were anxious to close down the hearings.
As a result of his involvement in Poulson's affairs Maudling was compelled to resign as Home Secretary. In the course of the next three years or so Poulson, T.Dan-Smith, Pottinger and several others were convicted in the Leeds Crown Court and sentenced to lengthy terms of imprisonment. A further upshot of the case was the establishment of a Royal Commission on Standards in Public Life chaired by Lord Salmon. Muir Hunter was one of the chief witnesses to give evidence to the committee and many years later produced an article for the Oldie Magazine on the subject of corrupt practices. Muir Hunter was particularly proud of the public praise for his courage in relation to the Poulson affair that he received from Lord Denning, at the time Master of the Rolls. Years later Muir Hunter paid several visits to Whitchurch to reminisce with the Lord Denning.
In the following entries on the Hunter Collection and the Poulson affair we will consider, inter alia, the press background to Poulson; the full case against Poulson; the effect of the case on Reginald Maudling; Muir Hunter QC's Bar Council misconduct hearing, and the role of messrs Hunter, Graham, Crystal and Simpson in the Poulson affair.
Picture Credit: Yorkshire Post.