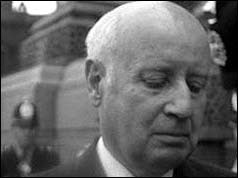 As the final draft of the Muir Hunter Museum of Bankruptcy display at the Royal Courts of Justice is signed off today (the date for the unveiling ceremony will be posted in due course), some further exciting news comes from the museum.
On Wednesday of this week (05/08/09) Professor David Graham QC and John Tribe travelled down to Hunterston in Donhead St Matthew, near Shaftesbury, to visit Professor Muir Hunter QC's widow, Mrs Gillian Petrie Hunter. We had an enjoyable afternoon discussing, inter alia, Professor Hunter and his bankruptcy work and wider activities, and Mrs Hunter's time as Sir John Betjeman's secretary. Mrs Hunter has kindly lent a number of interesting items to the museum on long-term loan. These include:
The long-term loan materials from Mrs Hunter are now being catalogued. The results will be posted here in due course. The above materials, particularly the Poulson archives, are going to form the core of two doctoral funding bids. CILP, which has been closely associated with Professor Hunter, is particularly grateful to Mrs Hunter for her kindness to us and her assistance generally.
Picture Credit: http://news.bbc.co.uk/media/images/40786000/jpg/_40786447_poulson238.jpg