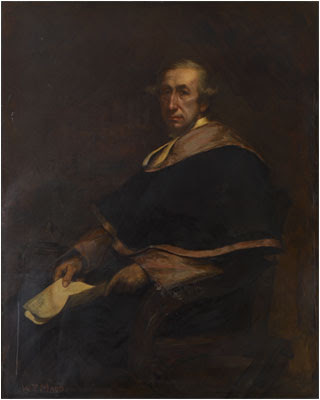 As previously promised in the HOBS - Bankruptcy Commentators blog post, there now follows the second personage in our continued pictorial exposition of bankruptcy commentators. Featured on the right is Sir Roland Lomax Bowlder Vaughan-Williams (1838–1916). One wag (who is now in silk) has mentioned that to succeed as an editor of Williams on Bankruptcy you must have at least one unusual middle name. Muir Hunter was of course given the middle names of Vane and Skerret by his parents. Sir Roland remains perhaps the most famous author/editor of the work which carried his name for nineteen editions over one hundred and seventeen years. The title acquired the 'Muir Hunter' addition in 1979 with the nineteenth edition. Sir Roland came from a long line of authors and lawyers. Sir Edward Vaughan-Williams, his father, was a judge of the Court of Common Pleas from 1846 to 1865. Sir Roland's great-grandfather was Serjeant John Williams, author of the commentary Saunders's Reports. Sir Roland was educated at Westminster School and Christ Church, Oxford, exactly the same educational path as his successor editor, Muir Hunter. Sir Roland was called to the bar by Lincoln's Inn in November 1864. His ODNB entry notes that, "his reputation at the bar was one of learning rather than of advocacy, and it was not until 1889, when he was over fifty, that he became a queen's counsel...In 1891 the bankruptcy jurisdiction of the High Court was assigned to him [he became a judge in February 1890] and during the next seven years he rendered conspicuous service in applying from the bench his wide experience to the problems of bankruptcy and liquidation, subjects in which the law was then still in a stage of development."
Sir Roland is also remembered by many a company law undergraduate for his first instance decision (Broderip v. Salomon [1894] 2 Ch. 232) in Salomon v. Salomon [1897] AC 22, where he observed, inter alia:

"‘I am perfectly convinced that the shareholders, who were all members of the family of Mr. Salomon, were nominees of Mr. Salomon". - ibid at p.329.

"In this case it is clear that the relationship of principal and agent existed between Mr. Salomon and the company" - ibid at p.332.

The judgment and approach of Sir Roland in his first instance decision would of course ultimately prevail over the House of Lords 'policy' opinions of 1897. In 1908 reform came about which caused the setting aside of debentures issued to company promoters within the first three months of incorporation. This period was increased in 1926 to one year.
Over time Williams on Bankruptcy has been written and edited by the following barristers:
An attempt will be made to continue the pictorial journey through the various editors of Williams on Bankruptcy over the coming months.
Picture Credit: Sir Roland Lomax Bowdler Vaughan-Williams (1838-1916) Lord Justice of Appeal, Government Art Collection, Artist: WT Maud, Oil on Canvas.