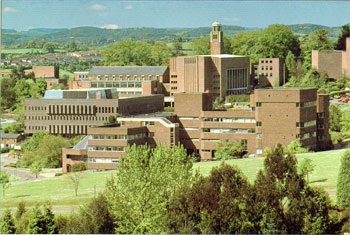 A recent BBC news report has highlighted the work of Exeter University's (pictured) Professor Stephen Lea, a professor of psychology. In addition to his 2001 publication on student debt (Scott, A.J., Lewis, A., Lea, S.E.G. (2001). Student debt: the causes and consequences of undergraduate borrowing in the UK Bristol, Policy Press) Professor Lea has published an interesting co-authored article in the Journal of Economic Psychology with Dr Wendy Wrapson and Dr Avril Mewse. Here is the title and the abstract:
Mewse, A.J., Lea, S.E.G., and Wrapson, W. (2010). First steps out of debt: Attitudes and social identity as predictors of contact by debtors with creditors. Journal of Economic Psychology, 31(6), 1021-1034.
"Questionnaire research was carried out to identify factors that may encourage problem debtors to take the first steps towards getting out of debt. Consumers with debt problems were identified with the aid of creditor organisations and the Courts service for England and Wales. Responses were also sought from non-debtors from the same consumer groups as the debtors. Response rates from debtors were very low, but results confirmed the existence of a group of chronically poor consumers with widespread and long-lasting debt and also confirmed the demographic differences between this group of debtors and non-debtors found in previous research. These debtors showed marked attitudinal differences from non-debtors, with reduced optimism and financial self-esteem, and a less internal economic locus of control. They also showed a distinct social identity, identifying with fellow debtors and feeling stigmatised both generally and personally. Within the debtor group, engagement with creditors was higher in people reporting lower debt levels, but seeking advice was more frequent in those reporting higher debts. Engagement was associated with a stronger attitude of financial self-efficacy and with a perception of the debtor identity as more permeable. Neither demographic nor psychological factors significantly predicted which debtors would seek advice."
Picture Credit: http://robinteverson.org/images/exeter1.jpg