Insolvency items in the news: insolvency defined and the Duchess and bankruptcy 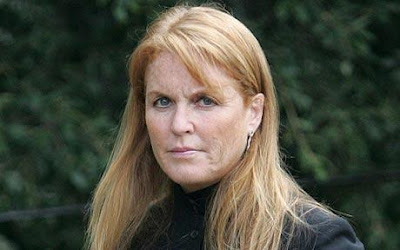 The Daily Mail and the Daily Telegraph are reporting that Sarah, Duchess of York (pictured) is constantly in a state of near bankruptcy. We have addressed the Duchess' liquidity issues before and the plight of some bankrupt peers. This latest twist in the Duchess's finances might see her name added to that of the Duke of Manchester and Duke of Leinster as a ducal bankrupt. The Telegraph note:
"In the first episode of Finding Sarah, her new six-part documentary series for Oprah Winfrey's television channel, the Duchess said: "I don't really understand finances at all".

She is believed to be receiving £200,000 for taking part in the series, which sees her submit to a string of tearful therapy sessions with TV counsellors and experts.
US television analysts have said the figure is "very low" compared to the sums paid even to medium-profile personalities in mid-ranking American reality TV shows.
"At the moment I'm just worried about paying off people that need to be paid off," the Duchess said. "There's three firms and three personal friends"...
"I lost all my jobs, I lost all my staff, I lost everything," she said.
"I've tried very hard not to go into financial bankruptcy." The Duchess blamed her financial illiteracy on her years spent receiving an allowance from the Queen as the wife of the Duke. "When we got divorced I didn't know how to do anything," she said...
In other news Mr John Kay has published an interesting article in the Financial Times which carries an exposition of the insolvency rules. The article is entitled: "New rules to protect the many from the few." The piece notes:


"...But in the past two decades many corporate collapses involved businesses that were not fundamentally bad but whose financial structures could not accommodate even modest setbacks. Bankruptcy of a corporate entity in these circumstances may have large, adverse and avoidable consequences for people who were not party to the original agreements. These issues arise for any business with a dominant market position or engaged in the production of a key public service. Elderly people who find that the bed on which they lie has been the subject of a financial transaction on which the lessee has defaulted are just a particularly hard case.


In 1986 Britain created a new insolvency regime, loosely modelled on the US Chapter 11, designed to make it easier to continue the business of a failed company. In many respects, this has worked well – perhaps too well. Pre-packed administration deals are marketed as a means of escaping liability for over-rented property, while US airlines fly in and out of Chapter 11 almost as often as they fly in and out of Chicago, waving creditors goodbye without changing the pilot. A recent Office of Fair Trading report highlighted the too common phenomenon of the administrator who remains in charge of the business for several years until his own fees have exhausted the assets.


General insolvency rules are inadequate when a care home, or a bank, or a water supply company fails. The first priority in these cases must be the residents, depositors and customers: creditors come after. We need special regimes for such businesses, which would limit gearing, without discouraging entrepreneurs looking to enter these sectors.


A resolution authority, more powerful than the existing Insolvency Service, could not only protect unsecured creditors more effectively, but also balance the interests of creditors with those of the public at large. Without such an institution it is hard to see how we can ever take schools and hospitals out of direct state control. We are engaged in yet another round of reform which ducks the issue of what happens when these organisations fail. Failure is intrinsic to the market economy: but the legitimacy of capitalism depends in part on how it deals with the consequences of such failure. Recently, it hasn’t been doing too well."

Anonymous said…
I wonder if the Duchess even knows what insolvency practitioners are. Guess this is the perfect illustration that the royals don't really live in this world and that finances are the thing dealt with by somebody else.
13 March 2012 at 16:37