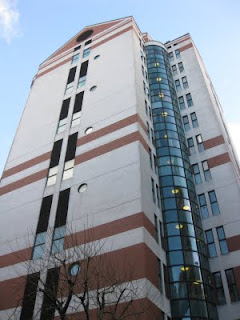 The Daily Telegraph and the Evening Standard (ES) are both reporting that the Bankruptcy Court at the RCJ (pictured) was the setting for a recent altercation involving a debtor's barrister, Mr Colin Challenger LLB MBA, a tenant at Lamb Chambers. The ES notes:
" A BARRISTER is suing the Met for wrongful arrest after he was led away in handcuffs while he was defending a client at a bankruptcy hearing at the High Court.
Colin Challenger, 65, is seeking £150,000 in damages, claiming he was assaulted and fell into a diabetic coma in his cell after the arresting officer confiscated his insulin medicine.
Mr Challenger says he got caught up in a fracas during an adjournment after a woman was asked to leave the court for shouting abusive accusations at his client in July last year.

Fearing he was about to be attacked, Mr Challenger said he pushed a man through an open door before locking it..."
This is not the first occasion that the Bankruptcy Courts have borne witness to alleged rough and tumble. Mr Registrar Simmonds was knocked to the floor during a bankruptcy hearing in 2002.
Picture Credit: http://2.bp.blogspot.com/_YrPhWhp-AW0/SseBEVbjXNI/AAAAAAAAAqs/Se4mIa8T2Fg/s400/thomas_more001.jpg

Anonymous said…
There was a slightly more extreme outbreak of disorder in the Cambridge County Court during a recent hearing of a bankruptcy related matter.