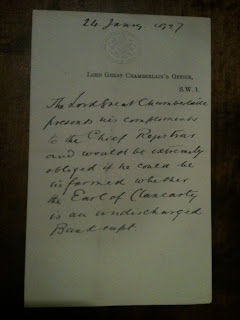 Following the recent long term loan acquisition of the Peerage and MP Ledger and the Cases of Enduring Public Interest Ledger, it gives me great pleasure to announce that the Chief Registrar in Bankruptcy has lent another set of historical bankruptcy documents to Kingston Law School on long term loan. The materials consist of a large file entitled, "Lord Great Chamberlain Correspondence Re Bankrupt Peers." This material greatly compliments the Peerage and MP Ledger as it contains over 45 documents that relate to peers that are in the Peerage and MP Ledger. Other peers are also mentioned who do not appear in the ledger. There are also a number of interesting documents, in addition to correspondence, that relate to the obligation to report peer bankrupts. The letters come from the Office of the Lord Great Chamberlain, the College of Arms, the Crown Office in the House of Lords, the Lord Chancellor, and the Bankruptcy Registry.
Future blog entries will outline the contents of the letters and documents. One letter will be cited now to give a flavour of the contents. A letter (pictured) featuring the letter head and seal of the Lord Great Chamberlain's Office, dated 24 January 1927, notes:
"The Lord Great Chamberlain presents his compliments to the Chief Registrar and would be extremely obliged if he could be informed whether the Earl of Clancarty is an undischarged Bankrupt."
The Lord Great Chamberlain of England is the officeholder who is in charge of the House of Lords. The office is the sixth great office of State. As one commentator has noted, "On ceremonial occasions, such as the State Opening of Parliament, the Lord Great Chamberlain and the Earl Marshal are responsible for meeting The Queen when she arrives at Parliament, and ensuring her wellbeing while in Parliament. On ceremonial occasions, the Lord Great Chamberlain wears scarlet dress and has the gold key of his office hanging from his waist.
The Lord Great Chamberlain has jurisdiction, entrusted by the Sovereign, for areas of the Palace of Westminster which are not administered by the House of Lords and House of Commons. These are primarily the Royal Robing Room and the Royal Gallery. He has joint control with the Speakers of the two Houses, for Westminster Hall and the Crypt Chapel.


The title is hereditary. After constant disputes, the House of Lords decided in 1902 that the office was jointly vested in the families of the Marquessate of Cholmondeley, the Earldom of Ancaster and the Marquessate of Lincolnshire. King Edward VII agreed that the post should be held in turn for the duration of a reign. The office is currently held by the 7th Marquess of Cholmondeley."


The letter cited above was sent during the tenure of the following three officeholders: