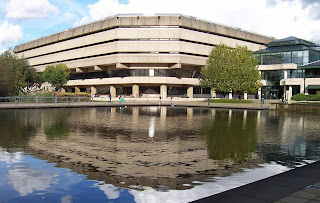 In the late 1970s and early 1980s Dr Sheila Marriner, an economic historian at the University of Liverpool, produced two groundbreaking articles on English bankruptcy records held at the National Archive (NA - now in Kew, England - pictured). Her work highlights the mass of archival material on the subject of bankruptcy that is available in the National Archive and elsewhere, including the London Guildhall Library, Royal Courts of Justice, Insolvency Service and local county archives.

It could be argued that the vast majority of official bankruptcy records prior to 1710 have been lost (see below). However, a plethora of other primary source material exists, particularly in the local archives (see below). This material will enable bankruptcy scholars to reconstruct bankruptcy law and practice from the early modern period until the present day. From such diverse sources as the Shakespeare Birthplace Trust Records Office and Dulwich School, to the more conventional collections in the Inns of Court and various Universities, scholars can find contemporary evidence of insolvent estate management, distribution and eventually discharge from primary and secondary source documents.

Some interest has been shown in bankruptcy records in the past. Primary source research material is of the utmost importance to scholars examining the history of the bankruptcy jurisdiction.[2] In her two articles Dr. Sheila Marriner[3] provides two fascinating expositions of early 19th century bankruptcy records in the NA. The records are not however complete at the NA. The author of this blog entry has communicated by written correspondence with Mrs HE Jones of the NA in relation to the bankruptcy records held at that institution (letter reference: PR/04/0211, 18/05/04) as no records of bankruptcy proceedings appear to exist prior to 1710 at the NA. In 1915 the Orders in Chancery appertaining to bankruptcy (1710 to 1868) were transferred to the Public Record Office, now the NA. The bankruptcy materials at the NA are contained within series B1 (“Records of the Office of the Commissioners of Bankrupts, the successor bankruptcy courts, and the court for the Relief of Insolvent Debtors, 1710-1995”), which contains 14 volumes. All other material remains in the Office of the Registrars of Bankruptcy (see: Giuseppi, MS. A Guide to the Manuscripts preserved in the Public Record Office. Volume One. HMSO, London, 1923, at page 295; see also: Scargill-Bird, SR. A Guide to the Principal Classes of Documents Preserved in the Public Record Office. HMSO, London, 1896, at page 30, where we are told, “the Commissions, Orders, and all other proceedings in Bankruptcy are kept at the Bankruptcy Court.”).

The Insolvency Service (an executive agency of the Department for Business, Innovation and Skills) retains contemporary material, making sporadic deposits at the NA. In terms of seventeenth century orders, Mrs Jones concludes, “I think the implication must be that no earlier records survived…I am sure that had there been any cognate records of an earlier date they would have been transferred at the same time.” This stark conclusion relates to the Lord Chancellor’s Order books only, other documents relating to statutes staple, bankruptcy commissions and imprisonment for debt survive in the NA and elsewhere, such as: