HOBS: Poulson (3) - The Legal Teams and the presiding Registrar 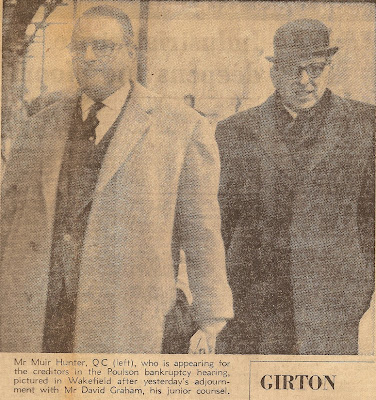 The Trustee in Bankruptcy's legal team in the Poulson affair featured some of the great names of the insolvency bar of the day. Leading the team was Mr Muir Hunter QC (pictured left). Muir Hunter at the beginning of the proceedings was almost 60 and had been the leading bankruptcy practitioner at the bar for more than twenty-five years. As editor of the standard work on the subject his knowledge of insolvency practice was at the time unrivaled; He had been counsel to the Board of Trade in Bankruptcy matters whilst also appearing in quite a few important bankruptcy cases including Bendall v. McWhirter [1952] 2 Q.B. 466, which helped to lay the foundations for the concept of the deserted wife's equity in the matrimonial home. The Trustee in Bankruptcy in that case, Bendall, was the leading partner in Poppleton and Appleby; his closest colleague in the firm was John Priestly, who himself became Poulson's Trustee in Bankruptcy.
David Graham (pictured right) was Muir Hunter's junior in the Poulson case. Born and educated in Leeds the Poulson case brought him back to home territory. By then he was becoming well-known as an insolvency practitioner having become Muir Hunter's devil in 1958 and working with him on the eighteenth edition of Williams, published in 1968. Throughout the case David worked closely with Desmond Simpson whose firm, RC Moorehouse & Co, acted as solicitors to the Trustee in Bankruptcy. The firm's offices were conveniently situated directly opposite those of the Official Receiver in Leeds; much of David's time was spent in the basement of the Official Receiver's office examining the voluminous amount of papers that had been taken over from Poulson's practice in Wakefield.
At that time Michael Crystal, also a Leodiensian, was David Graham's pupil and had a watching brief in the case.
Registrar Garside presided over the case. He was the registrar of the Wakefield and Barnsely county courts. He was a solicitor by training. His handling of such a complex and high profile case, much of which took place in public, must have been extremely burdensome and yet counsel involved in the case thought that he handled the case with great expertise and firmness.
Poulson's solicitor and advocate in court was Leonard Saffman. He, also, was an extremely well-known and respected solicitor in Leeds whose firm did insolvency work. He was a respected and formidable opponent.
Picture Credit: Hunter Collection at the Muir Hunter Museum of Bankruptcy, KU.