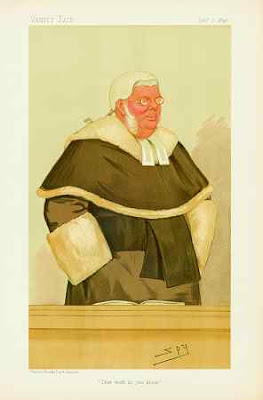 In a previous blog entry I mentioned the Viscount Cave, Lord Chancellor. For many years the 'Cave Orders' were a feature of the bankruptcy laws, particularly under the Bankruptcy Acts 1883 and 1914. Viscount Cave was not however the progenitor of these orders. The man responsible was Sir Lewis William Cave (1832–1897 - pictured), the Queen's Bench division judge. The 'Cave Orders' viz the Order of Mr Justice Cave dated January 1 1884, as amended by the same Judge's regulations of March 25 1885 make directions in relation to the office of Bankruptcy Registrars.
Cave was educated at Rugby School and Lincoln College, Oxford. He graduated BA  (1855) and MA (1877) whereupon he entered the Inner Temple as a student. He was called to the bar on 10 June 1859. He became a bencher on 15 June 1877 following his appointment as Queen's counsel on the 28 June 1875. He became a justice of the High Court, Queen's Bench Division on the 14 March 1881, and  was knighted. His biographer notes that he was:

"Burly in person and bluff in manner, he had a businesslike approach which shortened his cases. He seized points very rapidly, and frequently cut short argument with sharp questions of counsel, such as: ‘That won't do, you know. Have you anything else?’ or ‘What do you say to that?’ He was as competent in criminal as in civil cases."

In relation to the bankruptcy jurisdiction it is noted that "His knowledge of business made him an especially good bankruptcy judge in the Queen's Bench Division under the act of 1883. Had he retired when he resigned the bankruptcy jurisdiction in 1891, his reputation would have remained high. His vigour flagged thereafter, however, and signs of decay were plain for some time before his death of paralysis at his home... on 10 September."
So what was the substance of the 'Cave Orders'? These can be examined in depth in the nineteenth edition of Williams on Bankruptcy at pages 782 to 784. A brief flavour will be given here:

"1. The Registrars in Bankruptcy of the High Court to hear and determine the following matters and applications which by the Rules are directed to be heard and determined in open court:
(a) The public examination of debtors;
(b) Applications to approve a composition of scheme of arrangement;
(c) Applications for orders of discharge or certificates of removal of disqualifications."