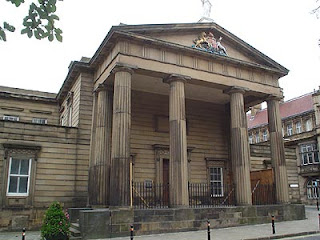 His Honour Judge Behrens has handed down his judgment in Peoples Phone Ltd v Nicolaou [2011] EWHC 1129 (Ch) (06 May 2011).  The case contains an interesting discussion of IVAs and contingent creditors on appeal from the Wakefield County Court (pictured). On contingent creditors the judge notes:
"As the question whether PPL is a "contingent creditor" is academic I propose to deal with it relatively briefly:
1. There is no definition of contingent debt or liability in section 382 of the Insolvency Act 1986.
2. In Glenister v Rowe the Court of Appeal held that a party to litigation against the bankrupt prior to the bankruptcy where the order for costs was made after the bankruptcy. The discretionary nature of the Court's power to order costs indicated that there was no liability contingent or otherwise in the absence a Court order. Similarly in the Birmingham City Council case a liability to repay benefit which was determined to have been a recoverable overpayment subsequent to the bankruptcy was not a contingent liability as at the date of the bankruptcy. This was because the liability only arose when a determination of misrepresentation which took place after the bankruptcy. This determination was not a mere formality so there could not be said to be a contingent liability as at the date of the bankruptcy.
3. On the other hand in the T & N case David Richards J held that potential claimants for asbestos related injuries who had been exposed to asbestos but had not suffered compensatable loss as at the date of the creditors' meeting were contingent creditors. In those cases the contingency was whether the claim in tort was completed by the development of the relevant condition.
4. Miss Temple submitted that this case was analogous to the two Court of Appeal authorities referred to above. She pointed out that rectification was a discretionary remedy and thus covered by those two decisions. In the T & N case there was no discretionary element. Either the claimants developed the relevant condition or they did not. It was on that basis they were contingent creditors.
5. To my mind there is force in Miss Temple's submissions. I agree that PPL was not a contingent creditor within the meaning section 382 of the Act. As at the date of the IVA it was an actual creditor. Whether it remained an actual creditor after the date of the Deed of Surrender depends on the outcome of the rectification proceedings. If the rectification proceedings succeed it remains an actual creditor throughout."
Picture Credit: http://www.visitoruk.com/images/wakefield_court.jpg