Insolvency Items in the News - Gazza's IVA and IVA advice 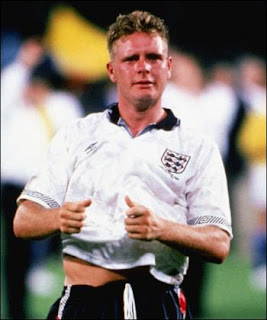 There are a couple of interesting insolvency items in the news. First, Mr Paul Gascoigne's bankruptcy issues seem to be behind him. This will come as a relief and there should be no more debt upset for him (pictured). The BBC are reporting that a bankruptcy petition against the 43 year old former footballer has been dismissed in the High Court in London. He apparently owed more than £30,000 to HMRC. Gazza is coming to a composition with his creditors using an IVA. As the BBC note, "...the court heard that a proposal had been put forward by Gascoigne which would allow him to pay off the full debt to HMRC within a structured time scale. District Judge Clarke, sitting at the Bankruptcy Court in London on Wednesday, heard that Gascoigne's "individual voluntary arrangement" had been approved on 13 May at a meeting of creditors."
Elsewhere, IVA advice firm Fairpoint has issued a profit warning according to Accountancy Age. It might be fair to point out that Gazza's IVA has not been organised by the firm!
Picture Credit: http://img.thesun.co.uk/multimedia/archive/00755/Gazzacry_350x420_755611a.jpg