Bankruptcy and the law in the Forsyte Saga 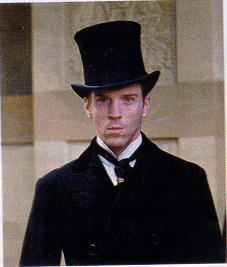 Mr John Galsworthy OM's 1932 Nobel prize winning Forsyte Saga is  a well-known and much loved exposition of upper middle class British family life. Law runs through the series of books, perhaps most obviously demonstrated by the third book, 'In Chancery', which was published in 1920. Bankruptcy also features. As Hunter has noted: "Philip Bosinney, in Galsworthy's Forsyte Saga, could not have sought to defend Soames Forsyte's bankruptcy petition, on the grounds that it was principally, if not wholly, motivated by the desire of Soames, a very rich man, to revenge himself on his wife's lover." (Hunter at 501 ft.40a). We have discussed bankruptcy as a weapon on the blog before. In the Forsyte Saga Soames Forsyte (pictured right) seems to have  been actuated not by a desire to participate in a distribution, but for more deep seated motivations. Bankruptcy is mentioned in chapter VII (Dartie v.s Dartie) of In Chancery:


"What worried him as a lawyer and a parent was the fear that Dartie might suddenly turn up and obey the Order of the Court when made. That would be a pretty how-de-do! The fear preyed on him in fact so much that, in presenting Winifred with a large Christmas cheque, he said: "It's chiefly for that chap out there; to keep him from coming back." It was, of course, to pitch away good money, but all in the nature of insurance against that bankruptcy which would no longer hang over him if only the divorce went through; and he questioned Winifred rigorously until she could assure him that the money had been sent. Poor woman!--it cost her many a pang to send what must find its way into the vanity-bag of 'that creature!' Soames, hearing of it, shook his head."


"When his son-in-law Dartie had that financial crisis, due to speculation in Oil Shares, James made himself ill worrying over it; the knell of all prosperity seemed to have sounded. It took him three months and a visit to Baden-Baden to get better; there was something terrible in the idea that but for his, James's, money, Dartie's name might have appeared in the Bankruptcy List." 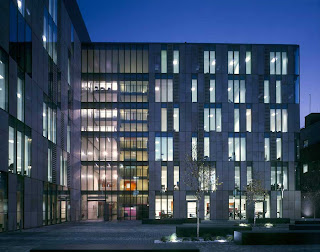 Galsworthy was a Kingston upon Thames resident and was born on Kingston Hill (the area where KLS is located). In 2007 Kingston University named a new £20 million building (pictured left) after the sometime barrister, old Harrovian, and jurisprudence graduate of New College, Oxford. Galsworthy was called to the bar in 1890. He was awarded the Order of Merit in 1929 having previously turned down a knighthood. He was too ill to collect his 1932 Nobel prize. He died six weeks after the award. For other debt related literature see here.
Picture Credit: http://www.ceejbot.com/EricPorter/Forsyte/promos/2001-series-soames-hat.jpg and http://www.e-architect.co.uk/images/jpgs/architects/kingston_university_cpetercook_jma300508.jpg