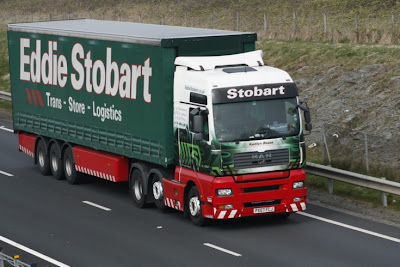 Our list of famous bankrupts can now be augmented with the name of Stobbart. The News & Star is reporting that Mr Edward Stobbart is bankrupt. His family name is synonymous with the famous trucks which are a daily feature on our roads (pictured). The article continues:
"The trucking legend who transformed the Cumbrian haulage firm Eddie Stobart into a household name was bankrupt when he died.
Legal papers which have just been released show Edward Stobart, who ran the firm for 30 years, had personal debts of £220,000 at the time of his death.
He died in hospital aged 56 in March after suffering a heart attack.
It has now emerged that Mr Stobart petitioned for his own bankruptcy at Warwick County Court last July. RSM Tenon, the insolvency firm dealing with the case, said today: “Known creditors have claims amounting to around £220,000. No material assets have yet been recovered. The investigations are ongoing.”
The business was started by Edward’s father Eddie in the 1950s as part of his agricultural business in Cumbria. But it was Edward rather than his father – known as Eddie to distinguish the two – who built up the business, taking over the fleet when he was just 21 in 1976..."
Picture Credit: http://4.bp.blogspot.com/-jJOQJbP30TI/TZR-zaBkM1I/AAAAAAAADH8/K1fHX6AFFoo/s1600/eddie-stobart.jpg

Stephen Hunt, Partner at Griffins Insolvency Litigation Forensics said…
As a small clarification, in fact RSM Tenon were replaced by Tim Bramston of Griffins as Trustee in Bankruptcy on 25th March 2011, 6 days before the death of Mr Stobart.
27 May 2011 at 00:19