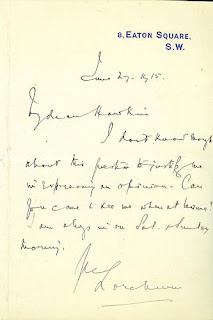 The Muir Hunter Museum of Bankruptcy at KLS has acquired two further interesting obejcts. The first is a signed letter written by the Earl Loreburn. A graduate of Cheltenham College and Balliol College, Oxford, Sir Robert Threshie Reid DCL, QC, KCMG, PC,  the 1st Earl Loreburn, Baron Loreburn of Dumfries (1846–1923) was called to the bar by the Inner Temple in 1871. His biographer notes that he was, "...Especially able in commercial suits, ‘he could unravel complicated details in a partnership and track a fraud through all its windings’ (The Times, 1 Dec 1923)."  Lentin continues with a vivid physical description of Reid; "A stout, bluff, good-natured man, addicted to his cup of tea and his clay pipe, with a strong physique and a large head (which critics called ‘swelled’), determined in his opinions, yet kindly and soft-spoken, he was well liked for his frank, open demeanour, his informality, and his sportsmanship. In an age when first names were less frequently used than later, he was widely known as ‘Bob’ Reid."
Loreburn took silk in 1882 aged 36. In 1894 he was knighted following his appointment as Solicitor-General. In the same year he became Attorney-General following his predecessor's elevation to the Court of Appeal. Loreburn was appointed Lord Chancellor in December 1905. He was raised to an earldom in the coronation honours of 1911. Loreburn's noteworthy insolvency opinions include: 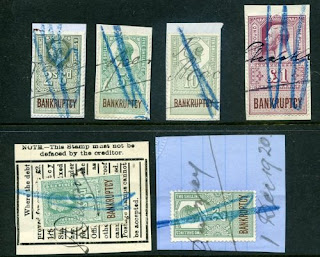 The second item is in fact six items as it is a tracnhe of bankruptcy revenue stamps. The bankruptcy revenue stamp stamp collection grows apace! The stamps are 1921 KGV 1/6, 2/-, 2/6, 5/- 10/- & £1 - all on small pieces. One of the stamps (bottom left) is particularly noteworthy as the document upon which it is attached contains guidance to creditors on the use of stamps.