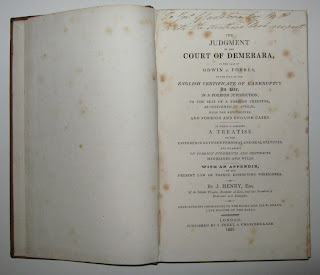 The Muir Hunter Museum of Bankruptcy at KLS has acquired another interesting item which builds on Professor David Graham QC's previous work on Jabez Henry (citations below). The acquisition is Henry's work on international insolvency law. The book is:
Henry, J. The judgement of the court of Demerara, in the case of Odwin Vs. Forbes. On the plea of the certificate of bankruptcy in bar,in a foreign jurisdiction, to the suit of a foreign creditor, as confirmed in appeal, with the authorities, and foreign and English cases. To which is prefixed...&c. S. Sweet. London, 1823. 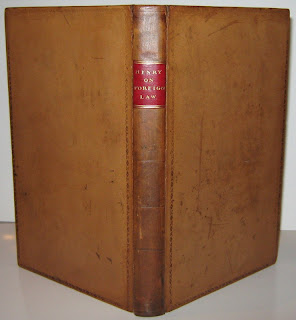 The book is a small full calf gilt volume (4to. xv[i], 295[1]pp - pictured) with minor wear and spotting to boards. The most important fact though is that the volume is from the WE Gladstone library at Fasque and is inscribed by the author to the famous politician. In 2008 Gladstone’s famous library was sold prior to the sale of Fasque. It has been noted that, "The collection of over 2000 books in Fasque dated from Gladstone’s early life and included important family books. Among them were Bibles, poetry, literature and a vast range of books on ornithology, military history, botany, exploration and geography. Also included were photographs, plus letters on slavery written in 1830 by Gladstone's Scots-born father, Sir John Gladstone, a successful plantation owner. The range of books reveals the erudition of Gladstone, a man so driven and energetic that in his diaries he accounted for every 15 minutes of his day. He spent many hours during his time at Oxford from 1828 to 1831 visiting local booksellers..."


David's work on Jabez Henry can be seen in:
David will be using the volume to investigate the links between Jabez and Gladstone, Queen Victoria's Prime Minister. As noted above, the book is signed by the author (pictured top right) and was gifted to Gladstone. The gift must have been made sometime after 1832 when Gladstone first entered Parliament an MP, but before 1 September 1835 when Jabez died. The first elements of the Gladstone/Jabez link will follow on the blog in due course.