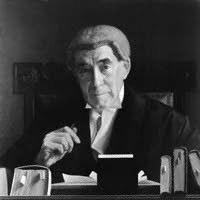 1929 is a key date for insolvency history as it was in that year that fraudulent trading (now contained in section 213 of the Insolvency Act 1986 and section 993 of the Companies Act 2006) and director disqualification (now regulated by the Company Director Disqualification Act 1986) were placed on the statute book for the first time. Some tensions surrounding these 'penal' jurisdictions were outlined in yesterday's post.
The Greene Committee of 1926 proposed these reforms (see: The Company Law Amendment Committee, 1926, Cmnd 2657). The committee was chaired by Mr Wilfred Greene OBE, MC, KC, later Lord Greene M.R. (1883–1952 - pictured). Lord Greene had a distinguished academic career at Westminster and Oxford, winning many prizes, including the Vinerian scholarship in 1908. An Inner Temple man, he was called to the bar in 1908. He undertook pupilage in the chambers of Philip Stokes, "one of the busiest and most esteemed equity practitioners". (ODNB). Greene took silk in 1922 and became a bencher of his inn in 1925. Unusually, he went straight to the Court of Appeal in 1935 and subsequently served as Master of the Rolls between 1937 and 1949. He then became a Lord of Appeal in Ordinary before retirement.
What else happened in 1929? The year is also noteworthy as during the twelve month period the following also occurred. For our subject the most important event was of course the Wall Street crash which led to the Great Depression. More than $30 billion was wiped off the New York Stock Exchange. This figure was ten times greater than the annual budget of the US Federal Government. The Peruvian Air Force was also created. Perhaps more importantly the BBC broadcasted a television transmission for the first time. On the 14th February Al Capone's hoodlums committed the St. Valentine's Day Massacre, killing seven mobsters whilst dressed as policemen. On 16th May the 1st Academy Awards were presented. Wings won the Best Motion Picture award. On the political front there is a direct parallel to current politics. On May 31st the General Election returned a hung parliament. The Liberals controlled who had power. On the literature front  All Quiet on the Western Front by Erich Maria Remarque, Ernest Hemingway's A Farewell to Arms, and Robert Graves Goodbye to All That were published.
Picture Credit: Gluck, 1929.