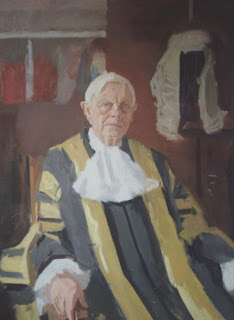 Mr Justice David Richards has handed down his judgment (whilst sitting as a Court of Appeal judge - the formal robes for this position are pictured right) in Brook v Reed [2011] EWCA Civ 331 (25 March 2011). The case concerns Insolvency Practitioners' (IP) remuneration and in particular a consideration of The Practice Statement: The Fixing and Approval of the Remuneration of Appointees (2004) (Practice Statement) and the costs and remuneration of Trustees in Bankruptcy. As the learned judge notes, "The development of the law and practice in this area has to be seen against a background of public concern as to the levels sometimes reached by office-holders' fees and remuneration, together with a public interest in seeing that office-holders' duties are competently and properly carried out." Richards, J then goes on to cite Dickens, Maxwell, the OFT and the IS response to the OFT as further examples of why IP costs have been a public issue of concern.
In a tour de force of the area of IP remuneration the learned judge then goes on to examine Mirror Group Newspapers plc v Maxwell (No 2) [1998] 1 BCLC 638 judgment and the subsequent Ferris Report into IP remuneration before citing both Re Independent Insurance Co Ltd (No 2) [2003] 1 BCLC 640 and In Re Cabletel Installations Ltd [2005] BPIR 28.
Richards, J then examines the Practice Statement in some depth. On the legal effect of the statement he notes: "The Practice Statement of itself cannot make law on substantive issues or require courts to apply the guiding principles stated in it. But the Practice Statement is not an attempt to create a new set of principles, but a convenient means of gathering together in one place the principles to be derived from the Insolvency Rules and authority, including the most recent at that time, the judgment of Ferris J in Maxwell."
The learned judge then includes an interesting passage on how the Practice Statement has been used:
"The Practice Statement acquires authority as a statement of guiding principles if it is expressly approved and applied as such in judgments at an appropriate level. In at least two reported cases, it has been approved and applied by High Court Judges: Simion v Brown [2007] BPIR 412 and Hunt v Yearwood-Grazette [2009] BPIR 810.
The great majority of applications relating to office-holders' remuneration are heard by the Registrars at the Royal Courts of Justice and by district judges in the Chancery Division District Registries and in those county courts having insolvency jurisdiction. It is apparent from reported decisions of the Registrars that they apply the Practice Statement: see for example Re UIC Insurance Co Ltd [2007] BPIR 494 and 589, Barker v Bajjon [2008] BPIR 771, Freeburn v Hunt [2010] BPIR 325 and Re Super Aguri F1 Ltd [2011] BPIR 256. District judges do likewise, as can be seen from the judgment in Hunt v Yearwood-Grazette.
The Statement has also been referred to with approval by courts in other common law jurisdictions: see Korda, Re Clynton Court Pty Ltd [2005] FCA 543 (Finkelstein J, Federal Court of Australia), Flynn v McCallum, Re Roslea Path Ltd [2009] NZHC 2318 (Heath and Venning JJ, High Court of New Zealand)."
Following a consideration of the facts of the bankrupt's case the learned judge dismiss the appeal after applying the substance of the Practice Statement.
Picture Credit: http://www.susannahfiennes.com/1990%20Sir%20Brian%20Neill,%20London,%20Court%20of%20Appeal%20Judge.jpg