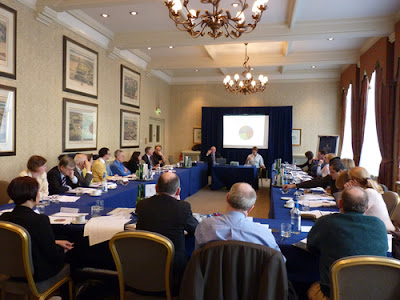 I was conflicted out by teaching commitments at the LSE (where I have been covering Professor Finch's sabbatical) so could not make the recent Insolvency Lawyers Association (ILA) 2011 Academic Colloquium at the University of Oxford. The event took place on the 25th March in Oxford. I am particularly annoyed at missing the event as my sources tell me that the day was a great success. Nearly all the top names in our subject attended, including two of my old tutors, which makes my teaching enforced absence even more vexing! The attendees included a US bankruptcy judge, practitioners (solicitors and barristers), academics and postgraduate students. In no particular order the attendees were (pictured):
Mr Jeremy Bamford, of Guildhall Chambers, is summarising the day for the ILA website. With his permission I will post his summary, and the details of the various papers which were delivered, on the blog in this post over the next couple of days. Here is Jeremy's note from the event:


Given the approval on 22nd March 2011 of the second CVA for JJB Sports and the scathing comments of Henderson J in finding the Miss Sixty CVA to be unfairly prejudicial to the interests of Mourant (Technical Bulletin 295), it was apt that Professor Adrian Walters and Dr Sandra Frisby started the Colloquium with their empirical research into "CVA Outcomes" and their attempts to identify The Good, The Bad & The Ugly. Based on research from a dataset of 547 CVAs, recorded information and stratified sampling, they explored CVA outcomes, duration, returns to unsecured creditors and costs. Their key findings suggest that whilst a majority in number of CVAs are proposed by small companies, the moratorium procedure is rarely utilised and that in those cases where the CVA succeeds the creditors appear to do very well. The speakers also put forward a number of policy implications arising from their research, including whether the moratorium should be extended to larger companies and a suggestion for CDDA reporting in respect of failed CVAs to deter potential abuse.


Kristin van Zwieten of Magdalen College Oxford and a Doctoral candidate with the Law Faculty then enthralled delegates with her talk on "Corporate Insolvency Law in India", based on her paper "Courts in Transition: Explaining the operation of Indian Corporate Insolvency Law". Kristin summarised the corporate insolvency procedures currently available in this emerging insolvency market and then concentrated on the much discredited rehabilitation mechanism contained within the Sick Industrial Companies Act 1985 ("SICA"). Based on an extensive review of all available SICA cases handed down before September 2009 obtained from Indlaw, Kristin identified 3 judicial innovations in the benign interpretation and application of SITA in the period following India's transition to a market economy, which appear to have been driven by judicial concern for company workers in a country lacking any welfare state safety net.


Professor McCormack then shifted delegates' attention closer to home with his talk on Irish Banking Insolvency and his paper "Bad banks - how to deal with "bad" bank assets - Ireland and other case studies". He explored the use of asset management companies (AMCs) as a means of dealing with toxic bank assets with case studies from the use of AMCs in Sweden, Malaysia and the US, the experience from Ireland of the National Asset Management Agency (NAMA) and highlighted criticisms of such schemes, in particular those advanced by the Nobel Laureate Joseph Stiglitz who gave evidence as an expert witness in the legal challenge to NAMA: Dellway Investments v NAMA [2000] IESC 4.


A lively round table discussion concluded the Colloquium, which focused principally on the Insolvency Service's consultation on administration expenses and the efficacy of the ILA Technical Committee's submission to the Insolvency Service of suggested amendments to the administration expenses regime. Further feedback from both academic members and practitioners concerning the suggested amendments is sought by the ILA and can be left on the ILA Forum or e-mailed to the Technical Committee.


The Colloquium proved to be a great success and is the first major event to follow Peter Cranston's invitation to academics to become members of the ILA from 1 December 2010, thereby encouraging greater collaboration between practitioners and academics. In the finest tradition of Oxford the debate was continued by both academics and practitioners at The Kings Arms.


Many thanks to Professor Milman, Professor McCormack and John Tribe for organising the technical content; to the speakers for the technical content and to Chris Mallon, Sian Ellis and all the team at Skadden for organising a great event."
For those who also missed the Oxford event - do not worry! The Insolvency Service and Nottingham Law School Insolvency Research Day is on the 5th April. We can get our insolvency discussion fix then. See you there!
Picture Credit: Insolvency Lawyers Association.