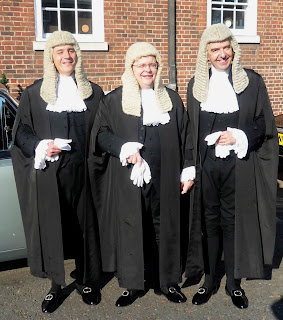 The 2011 Queen's Counsel list has been published by the Ministry of Justice. There is some happy news for Kingston Law School as one of our visiting professors has been awarded silk (honoris causa). Professor Monty Raphael QC is the doyen of white collar crime and has been a visiting professor at the University for the last six years. Congratulations to Monty!
On the insolvency silk front a number of elevations have been announced. At 3/4 South Square's Glen Davis, Barry Isaacs, and Felicity Toube, are to be elevated to silk. At Maitland Chambers Michael Gibbon will join the front row in silk and over at Hogarth Chambers Nicholas Caddick will be similarly attired in the near future. The Lord Chancellor will preside over the ceremony on the 7th April 2011 when the new silks will receive their letters patent whilst bedecked in their finery (pictured) at the Palace of Westminster.
Picture Credit: http://www.2-3graysinnsquare.co.uk/_files/P1010554.JPG