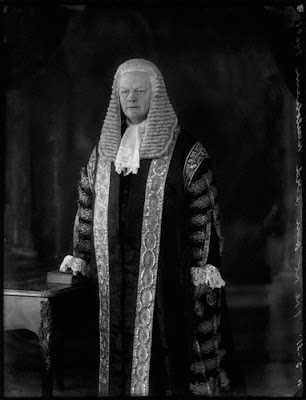 We have discussed the contribution of pigs to the insolvency jurisdiction before. I mentioned in the previous pig post that I would not discuss Sir Francis Bacon, as I have discussed him elsewhere, or Douglas or Quintin Hogg's contributions to our subject. This entry is me renaging on that statement! I could not resist sharing an anecdote that relates to Hogg senior, namely Sir Douglas Hogg KC (28 February 1872–16 August 1950 - pictured right), later 1st Viscount Hailsham PC. Hogg was called to the bar by Lincoln's Inn in January 1902. He took silk in 1917. He became a bencher of Lincoln's Inn in 1920. Randolph Churchill recounts the following anecdote in his 1959 biography of Lord Derby (at page 460-1) regarding a meeting in October 1922:
"The difficulties in which the leading members of the Government found themselves at this time are well illustrated by an anecdote which is told by the sons-in-law of the Duke of Devonshire [Victor Christian William Cavendish, 9th Duke of Devonshire KG PC GCMG GCVO JP (31 May 1868 – 6 May 1938 - pictured below left)] One evening while the Government was being formed Derby went round to Devonshire House. This was only a few months before this splendid building in Picadilly, with its galaxy of memories of political confabulations extending over two centuries, was to be pulled down and replaced by Lord Roote's glittering automobile emporium. Devonshire expressed concern that the Government's lack of adequate representation in the Commons, and in particular as to who would be the Government's principal spokesman, Baldwin being at this time utterly unversed in Parliamentary technique. Someone said:
'Let's get some clever lawyer.'
'I know the very man.' said Derby. 'Someone was telling me about him the other day, a fellow called Pig.'
'The only Pig I know,' said Devonshire, 'is James Pigge in Surtees.'
Thus did that able lawyer, Sir Douglas Hogg, who at that time was probably the leading Silk at the Bar, and who was destined as the first Viscount Hailsham to sit on the Woolsack, first come to the attention of the magnificoes of the Tory Party." 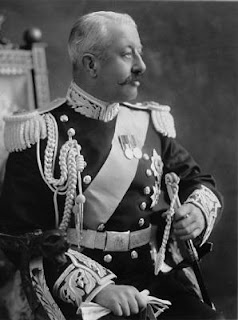 Douglas' son, the 2nd Viscount, Quintin McGarel Hogg, Baron Hailsham of St Marylebone, KG, CH, PC, QC (9 October 1907 – 12 October 2001) has a slight connection to our subject. Professor David Graham QC had some insolvency related contact with the 2nd Viscount. David recalls Professor Muir Hunter QC telling him that Quintin Hogg, later Lord Hailsham, mentioned to Hunter that it was his habit to read in full every contribution to the 4th edition of Halsbury's Laws of England, of which he was the general editor. In particular, it meant that he had read Muir and David's contribution on bankruptcy. Finally, on the formal occasion when David was sworn in as a QC by the Lord Elwyn-Jones at the Palace of Westminster, on the way out he met the Lord Hailsham who reminisced about how a year or so ago he was in charge of the ceremony. David also remembers Hogg cycling to Chambers along the Embankment. This will be my last entry on insolvency and pig related issues!
Picture Credit: http://images.npg.org.uk/790_500/2/4/mw114824.jpg & http://www.thepeerage.com/009584_002.jpg