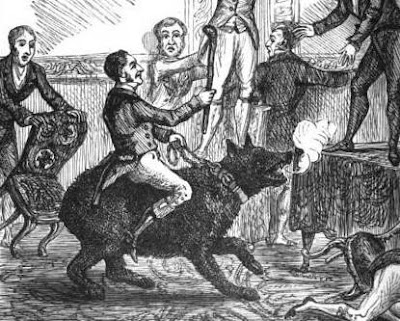 If you have not, inter alia, - kept a pet bear which you have ridden into dinner to the amazement of your friends (pictured right); drunk, on average, eight bottles of port a day commencing your imbibing whilst having your morning shave; kept 2,000 dogs which you have fed on steak and champagne and who wore livery; pretended to be a highwayman and shot at and chased two of your friends as they ran for their lives; squandered £10,000 a year (in the early 19th century) by, inter alia, leaving bundles of money in hedges and buried around your estate whilst hunting naked with your pet monkey; shot ducks in the nude whilst sat on a frozen lake; been expelled from both Westminster and Harrow (after three days); allowed a horse free internal reign of your country seat; fought a twenty round bare knuckle fight against a miner (which you won); put your wife's lapdog on the fire; set fire to your own nightshirt to cure hiccups, then you have not lived like Mr John 'Mad Jack' Mytton Esq (30 September 1796 to 29 March 1834) of Halston Hall, Whittington, Shropshire. Mad Jack, the sometime MP for Shrewsbury, also reportedly arrived at the University of Cambridge with 2,000 bottles of port with which to fortify himself during his studies. He was "a man of great physical strength and foolhardy courage, with a strong taste for practical jokes...a splendid shot and a daring horseman." (ODNB). 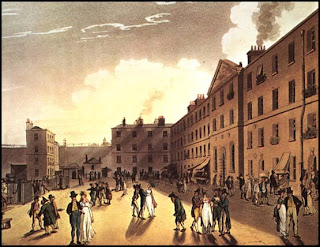 Why is Mad Jack important for this blog? His various activities eventually led to insolvency. His biographer notes that "by 1819 all his lands were heavily mortgaged and loans on his personal security were hard to find." Initially Mad Jack fled to Calais to avoid his creditors. He soon returned to England however. He died insolvent in the King's Bench debtor's prison (pictured above) in Southwark, London, in 1834 a "round shouldered, tottering old-young man bloated by drink. Worn out by too much foolishness, too much wretchedness and too much brandy." His longtime friend and biographer (Charles James Apperley, Memoirs of The Life of The Late John Mytton, Esq. (1835)) gave this assessment of Mad Jack; "...Did the late Mr Mytton really enjoy life amidst all this profusion of expenditure? No. He lacked the art of enjoyment. He was bored and unhappy. There was that about him which resembled the restlessness of the hyena. A sort of pestering spirit egged him on..." Mad Jack's death at the age of 38 "revived public affection for him, and on 9 April a half-mile procession of tenants, friends, and yeomanry troops escorted his body the last five miles to Halston chapel, where, in the presence of perhaps 2000 onlookers, he was buried in the family vault."
Picture Credit: http://www.futilitycloset.com/2008/02/11/mad-jack/ and http://www.spartacus.schoolnet.co.uk/LAkings.jpg

Tom Morgan said…
That was a great read, thank you for posting that John. What a colourful character Mr John 'Mad Jack' Mytton Esq was.
5 January 2011 at 18:05