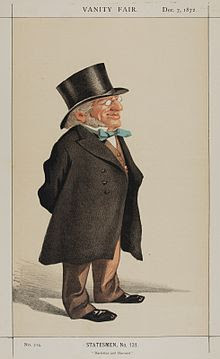 Last Wednesday Professor David Graham QC was fortunate to be in the Royal Courts of Justice to witness the swearing in of a new Justice of the High Court, Mr Bernard Eder QC. For many years Sir Bernard (as he is now called) was a distinguished member of the commercial bar and was also an editor of Scrutton on Charter Parties and Bills of Lading. It was a happy occasion for his family and friends.
It is perhaps time to reflect on some of Sir Bernard's legal ancestors at the bar. Quite fortuitously Professor Graham has been looking into some of the activities of his hero Mr Basil Montagu QC (the father of English bankruptcy), in the early 1830s. At that time the campaign for the removal of Jewish civil disabilities was gaining momentum. At its forefront was Sir Isaac Lyon Goldsmid (banker - 13 January 1778 – 27 April 1859); it will be recalled that about this time Sir Isaac hosted a gathering at his home which was attended by, amongst others, Basil, as well as Mr Thomas Babington Macaulay (sometime Commissioner of Bankruptcy clerk - later 1st Baron Macaulay PC (25 October 1800 – 28 December 1859)).
On the position of the Jews Macaulay had once argued, "the points of difference between Christianity and Judaism have very much to do with a man's fitness to be a Bishop or a Rabbi. But they have no more to do with his fitness to be a magistrate, a legislator, or a minister of finance than with his fitness to be a cobbler."
It has also come to Professor Graham's attention that shortly before the Goldsmid gathering a treatise on the disability of the Jews had been published by Mr John Eilijah Blunt (sometime Commissioner of Bankrupts and barrister).
It is almost certain that one of the Goldsmid's sons, Mr Francis Henry Goldsmid (1 May 1808 – 2 May 1878 -pictured) was present at the gathering. He to, like Basil and Macaulay, published several articles on the subject of Jewish emancipation. However, he deserves to be remembered in particular for his decision to become a barrister. He achieved his ambition when he was called to the Bar at Lincoln's Inn on the 31 January 1833. As Alderman has noted in the ODNB, he refused to take the oath, "on the true Christian faith" and was instead permitted to use the Hebrew bible. The Law List indicates that from 1833 until 1839 Goldsmid had chambers at 3 New Square, Lincoln's Inn and from 1840 until 1859 in 5 Stone Buildings whereupon he moved to 14 Portland Place, W1. As yet relatively little is know of his work at the Chancery bar, but he must have been sufficiently successful to be given silk in 1858.
It is Professor Graham's intention to do further research into Goldsmid's legal career, which, as far as we are aware has not been discussed in any sources, except a memoir of him that was published in 1882. This contains a portrait of him.
Professor Graham is also looking at the legal careers of other Jewish barristers at the time. He is particularly fascinated by the activities in the community of Sir George Jessel (13 February 1824 – 21 March 1883), later Master of the Rolls and great exponent of equity. It was Jessel who drafted the constitution of the new Jews' College which was established in the mid-1850s. To him and others Professor Graham will soon return.
Picture Credit: Vanity Fair.