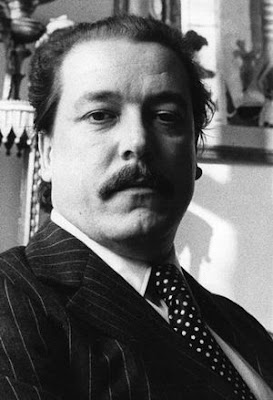 Mr David Hart died on the 5 January 2011 aged 66 from motor neurone disease. He was formerly an advisor to Mrs Margaret Thatcher and "assumed the air of a slightly dissipated 18th-century dilettante...However, some found his extrovert loquacity, his impossibly long cigars and his Sun King lifestyle and demeanour to be too strong meat." For these reasons alone we might discuss him here. There are however bankruptcy issues afoot upon which we can mull.
A number of obituaries have been published. The most comprehensive can be found in the Daily Telegraph. It is particularly interesting for the readership of this blog as it contains a fair amount of material on his 1975 bankruptcy and 1978 discharge. The piece is also noteworthy as it notes that Hart, "was bankrupted but nonetheless became the confidant of cabinet ministers." Rehabilitation from bankruptcy was perhaps then possible even in the late 1970s, especially if you were the heir of a banker. Not so much rehabilitation perhaps, but more paying creditors off in full. In relation to his bankruptcy it is noted that:
"The property boom of the late 1960s earned Hart his first million, but his extravagance ended with the bust of the mid-1970s, debts of £959,229 and an appearance in the bankruptcy court in 1975...The official receiver castigated his “delusions of grandeur” and took exception to the fact that many of Hart’s creditors were small tradesmen (including, reporters were delighted to discover, his gamekeeper’s tailor). “You give me the impression you have lived in cloud cuckoo land,” the receiver told him. “I’m afraid I’ve been very silly,” Hart admitted...Hart lost everything down to his fountain pen [pictured below]. His mother sent round her butler to look after him in his misery. Indeed, it was thanks to his family that he soon restored his position (and his lifestyle), exchanging the estate in Somerset for one in Suffolk. In 1978 he was discharged from bankruptcy after his brother paid off many of his debts. Around the same time he inherited a substantial sum from his father, which he added to with further dealings in the property market in the 1980s." 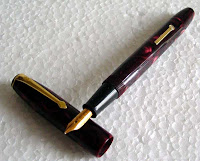 The extracts above provide a brief flavour of Hart's brush with bankruptcy. The full obituary is a must read for full details of his fascinating life. There are other obituaries on him in the Guardian which succinctly notes, "he lost a fortune – "delusionally" said the official receiver – in a tornado of extravagance, going bankrupt in 1975 to the tune of £960,000.His [father's] death in 1978 brought David's bankruptcy to an end." See also The Independent which notes, "He even had time to be bankrupted."
Picture Credit: http://www.independent.co.uk/multimedia/dynamic/00532/obithart_532404t.jpg and http://www.conwaystewartpens.co.uk/pics/cs.0630.jpg