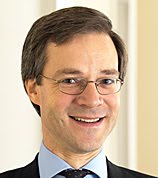 Mr Justice Newey (pictured) has handed down his judgment in Secretary of State for Business, Innovation & Skills v Doffman & Anor [2010] EWHC 3175 (Ch) (06 December 2010). The case concerns the application of section 6 (unfitness) of the Directors' Disqualification Act 1986 (CDDA86).  As the learned judge notes, "That section requires the Court to make a disqualification order against a person where his conduct as a director of one or more companies which have become insolvent makes him unfit to be concerned in the management of a company." What makes the case particularly interesting is that the defendants are both solicitors, one of whom went to my alma mater (the last part of that sentence is not particularly interesting!). The professional ramifications of disqualification are therefore perhaps more severe than for the typical 'lay person' director.
The learned judge summaries the position on unfitness very succinctly. He notes at paragraph 24 (onwards):
"In In re Sevenoaks Stationers (Retail) Ltd [1991] Ch 164, the Court of Appeal emphasised the importance of adhering to the statutory words, "unfit to be concerned in the management of a company". Dillon LJ (with whom the other members of the Court agreed) said this (at 176):
"It is beyond dispute that the purpose of section 6 [of the CDDA] is to protect the public, and in particular potential creditors of companies, from losing money through companies becoming insolvent when the directors of those companies are people unfit to be concerned in the management of a company. The test laid down in section 6 - apart from the requirement that the person concerned is or has been a director of a company which has become insolvent - is whether the person's conduct as a director of the company or companies in question 'makes him unfit to be concerned in the management of a company.' These are ordinary words of the English language and they should be simple to apply in most cases. It is important to hold to those words in each case."
When considering whether a person's conduct makes him unfit to be concerned in the management of a company, the Court is required by section 9 of the CDDA to have regard, in particular, to the matters specified in schedule 1 to the Act. In the present case, the Secretary of State relies on paragraph 1 ("Any misfeasance or breach of any fiduciary or other duty by the director in relation to the company ... "), paragraph 2 ("Any misapplication or retention by the director of, or any conduct by the director giving rise to an obligation to account for, any money or other property of the company") and paragraph 6 ("The extent of the director's responsibility for the causes of the company becoming insolvent").
As, however, Lawrence Collins J explained in Re Bradcrown Ltd, Official Receiver v Ireland [2001] 1 BCLC 547 (in paragraph 7):
"The matters listed in Sch 1 are not exhaustive of the matters which may be taken into account in determining unfitness …. Accordingly, a finding of breach of duty is neither necessary nor of itself sufficient for a finding of unfitness …."
Incompetence "to a very marked degree or a high degree" can amount to unfitness: see the Bradcrown case (at paragraph 10). The "degree of incompetence should not be exaggerated": see Re Barings plc (No 5), Secretary of State for Trade and Industry v Baker [2000] 1 BCLC 523 (at paragraph 35)."
After an exhaustive treatment of the facts in the case the learned judge concludes:
"I have found proved allegations relating to (a) the option which Cindan Southampton granted to Axelpark New Forest in May 2004 (paragraphs 94-99 above), (b) the £1,216,487 which Cindan Littledean paid in March 2005 for an option to buy the Humbrol Site and the borrowing from Barclays for this purpose (paragraphs 142-149 and 157 above), (c) the transfer from Stakefield to Axelpark Hull of 70 Mansfield Street in April 2005 (paragraphs 204-210 above) and (d) the waiver of debts owed to Stakefield in October 2005 (paragraphs 211-217 above).
Do these matters establish unfitness? To my mind, they do. While I recognise that a breach of duty will not necessarily show a director to be unfit, the allegations which have been proved involved a series of breaches of duty, in each case to the benefit of the defendants or entities associated with them, and large sums of money or assets of substantial value. The allegations have, moreover, a common theme: disregard for the separate interests of the individual companies. A person who, like the defendants, uses a company as a special purpose vehicle seeks to take advantage of the entity's separate legal personality; he must also recognise the concomitant duties.
In my judgment, the defendants' conduct does make each of them unfit to be concerned in the management of a company, with the result that I must impose disqualification orders. I shall hear further submissions as to the length of those orders."
Picture Credit: http://4.bp.blogspot.com/_YrPhWhp-AW0/S9Rn_U2YiaI/AAAAAAAABF0/dm2_pE3kqps/s320/Guy_Newey-39584.jpg