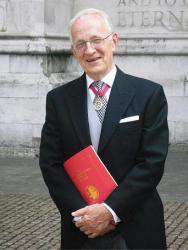 It could be argued that the Cotswold News is a very unlikely source to find a relatively thorough and extremely interesting biography of a recently retired member of the insolvency profession. That is however the source for a fine exposition of Mr Peter Joyce CB's career. For a detailed analysis of the sometime Insolvency Service Inspector General see here. The article notes Mr Joyce's view of the field of insolvency. He observes:
"There was when I joined The Insolvency Service a very evident distinction between the somewhat punitive and restrictive way in which insolvency law regarded, and dealt with, those who traded on their own account compared with those who did so through a company. That has changed – in some part because the secondary banking crisis of the early 1970s and the property collapse of the early 1980s, along with some notorious frauds perpetrated under cover of limited liability,  clearly showed that not all company directors could still be regarded as gentlemen of commerce; and in some part because of the increasing emphasis placed by ministers on rehabilitation of individuals who could be shown not to have acted irresponsibly or recklessly.
“But what has also changed, and dramatically so with the upward spirals in consumer debt, is the profile of bankrupts, with something approaching 90% now being non-traders. And with that, we have seen personal insolvencies becoming something of a lead indicator of looming economic problems – it happened in 1989-90; and it happened again when bankruptcies more than doubled and individual voluntary arrangements more than quadrupled between 2003 and 2006. The more recent levelling off might suggest some turning of the corner – except we have of course yet to see the impact of the measures the government will take to reduce the massive public debt.”
Picture Credit: http://www.cotswoldnews.com/news/1940/fifty-years-on-insolvency-leader-finally-steps-out