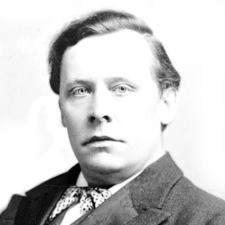 It is particularly sad to record the recent death of Mr Alfred Goldman, a solicitor member of the Cork Committee, at the age of 90. For many years he was the senior partner in Isadore Goldman & Son. The firm was founded in 1885 by Mr Isadore Goldman, Alfred's grandfather and to mark it's centenary year in 1985 Ms Angela Thirlwell published an excellent history of the practice. She is Alfred's daughter.
Isadore came from Sunderland and then moved his practice to London. He undertook bankruptcy work as did his son Joe Goldman, Alfred's father, who succeeded Isadore as senior partner. Joe, renowned for his important collection of books on cricket, followed in his father's footsteps and became an eminent insolvency practitioner (IP) in his own right. Drawing on Joe's memoir of his bankruptcy work, in particular during the 1920's and 1930's, Angela highlights some of Joe's more famous cases. In one of them he acted for the Trustee in Bankruptcy of Mr Horatio Bottomley (1860–1933 - pictured) the journalist, swindler and one time Member of Parliament for Hackney South.
Angela comments that, "Bottomley had he chosen to go straight, could easily have become Prime Minister. According to Joe's memoirs Bottomley had one of the largest number of bankruptcy petitions ever presented against any one debtor."
A Member of Parliament and editor of the paper John Bull during World War I, Bottomley had been a highly successful recruiting agent; he then started a Victory Scheme by which he defrauded the public of vast sums.
Joe acted for Bottomley's Trustee in Bankruptcy. He eventually saw him receive a sentence of seven years penal servitude from Mr Justice Salter at the Old Bailey.
Joe, Angela records, could not help being impressed by the style and insouciance of this celebrated bankrupt. On one occasion just before Bottomley was due to appear at his public examination in Carey Street he asked to see Joe beforehand. Joe visited him in Wormword Scrubs together with the Trustee in Bankruptcy to obtain certain information. Joe found Bottomley in prison uniform (as was customary then) sitting boldly with his two prison warders, quaffing a magnum of champagne together.
Joe's admiration for Bottomley's bravado was, Angela mentions, matched by Joe's respect for Bottomley's intellectual ability. Joe considered that Bottomley had greater oratorical gifts than most of the leaders at the Bar. During the prison meeting Bottomley received his two visitors with "the upmost suavity, sitting in the Governor's chair."
Angela when writing her history of the firm had access to Joe's written memoir, a record of instructions and briefs to counsel as well as other fascinating documentation. We will return to Joe's involvement in at least one further celebrated case, namely that of the honours peddler Mr Arthur Maundy Gregory, as well as looking at the day to day work of a firm of solicitors who at that time already had direct access and a right of audience before bankruptcy judges. Joe also frequently instructed well known counsel at the time specialising in bankruptcy such as the brilliant Mr Gilbert Bayfus QC and in particular, Sir Wintringham "Owlie" Norton Stable, later Mr Justice Stable and one time editor of Williams on Bankruptcy. Stable was renowned for his humour and also had, "a sensitive nose for fraudulent villains". Evelyn Waugh once wrote to Nancy Mitford on the humour of Mr Justice Stable. He observed:
"The jury were not at all amused by the judge. All the £300-a-day barristers rocked with laughter at his sallies. [The jury] glowered. This was not what they paid a judge for, they thought." (from: Gilbert M (ed), The Oxford Book of Legal Anecdotes (1986) at xii-xiii.)
Mr Justice Stable's ODNB biographer notes of our subject, "It requires a sound knowledge of the relevant branches of the law and can provide a comfortable, but not a substantial, income for its practitioners. but it seldom attracts the attention of the general public or leads to high judicial office."
Picture Credit: http://www.tomegatherion.co.uk/bottomley.jpg