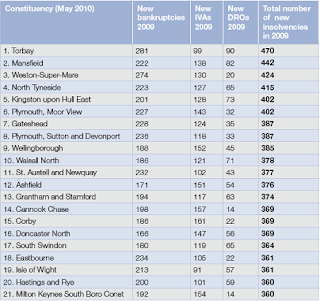 R3, the Association of Business Recovery Professionals, have published some interesting data (pictured) on Parliamentary seat insolvency rates. Their press release notes:
"A new map showing levels of personal insolvency by constituency reveals that Doncaster North, new Labour leader Ed Miliband’s constituency, came sixteenth on a list of insolvency hotspots in England and Wales, according to research by insolvency trade body R3, with 369 new personal insolvencies in 2009. David Cameron’s constituency of Witney is placed at number 322 (with 215 new cases), while Nick Clegg’s constituency, Sheffield Hallam, had the fourth lowest number of new personal insolvencies - with just 95 new cases in 2009.
Torbay on the South West coast tops the list with 470 new personal insolvencies in 2009, followed by Mansfield in Derbyshire with 442 new cases and Weston-Super-Mare near Bristol in third with 424. Torbay also topped the list in 2008 with 383 cases. A decline in tourism and heavy industries are key factors in creating insolvency hotspots in the North East and South West.
The constituency with the lowest levels of personal insolvency was Wimbledon in London with 78 cases, followed by Tooting, Ealing (London) both with 83 and Sheffield Hallam Co with 95 cases. These findings come as personal insolvency reaches record levels with over 134,000 for England and Wales in 2009. R3’s President Steven Law commented:
“Over the course of the last decade, personal insolvencies have increased by 350% and our research also shows that 42% of the British population are currently finding it a struggle financially to get through the month. The map that we have launched today shows where the problem areas lie, but we would expect personal insolvencies to continue to rise right across England and Wales over the next few years.
“In the North East the decline of heavy industries and the consequently higher than average unemployment in the region goes some way to explaining the high insolvency rates. In the South West, productivity and household income are below the UK average, coupled with a reliance on the tourism sector. Public sector cuts are likely to have an impact in future across the country as businesses who rely on those contracts begin to suffer. Our insolvency map also includes advice for MPs to help those of their constituents who are facing financial problems.”
Picture Credit: R3.