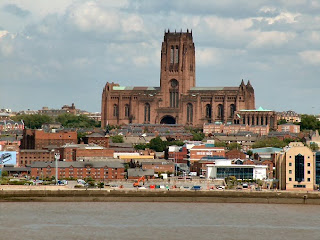 In a recent post I posed a question on the mysterious shooting of an Official Receiver (OR) in the Norwich county court. I have had a response to my query by email from Dr David Hirst. Dr Hirst's father was an Assistant Official Receiver (AOR) in Liverpool (pictured) and Dr Hirst remembers the shooting story from his childhood. He notes:
"... I can confirm that it was an OR from Liverpool who was shot in court by a debtor. It was, I think, a pistol rather than a shotgun [easier to smuggle into court, even in those days] and the date was mid/late 60s or early 70s. My late father was an AOR at Liverpool at the time, and obviously it was a major topic of conversation in the household at the time. Somewhere among the papers he left was a report of a subsequent event in which a judge at the Liverpool court was giving out bravery citations to two staff members who were involved, one, if I remember rightly, the court usher who grabbed the weapon.
While you comment on court disorder, in those days there was sometimes trouble when the OR's staff visited bankrupts at home. One junior Examiner was chased round a butcher's shop by a bankrupt with a cleaver, so my father [6 foot plus, ex-Irish Guards NCO] was sent out to deal with him - my mother and I went along for the ride, and were relieved to see him emerge unharmed."
Thank you Dr Hirst! If any other ORs (or their relatives) have any other interesting stories please email me and I will post them up.