The Lord Bingham of Cornhill KG's contribution to the insolvency jurisdiction 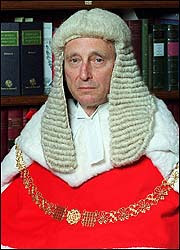 The Lord Bingham of Cornhill KG, PC, QC, FBA, (13 October 1933 - 11 September 2010 - pictured) the recently retired Senior Law Lord, sadly passed away on 11 September aged 76 following a period of illness. Unsurprisingly there have been numerous obituaries on "the greatest English judge since the second world war" (see: The Independent, The Scotsman, The Telegraph, The Guardian). The purpose of this blog entry is to chart the Lord Bingham's contribution to the insolvency jurisdiction. First however we must include some biographical material. The Lord Bingham was educated at Sedbergh and Balliol College, Oxford where he took a first in history. He was called by Gray's Inn in 1959 and took silk aged 38 in 1972. In 1980 he became a High Court judge in the Queen's Bench Division and a judge of the Commercial Court. He went to the Court of Appeal in 1986 and became Master of the Rolls in 1992 and Lord Chief Justice in 1996. He was appointed a Knight of the Garter in 2005, the first judge to join the highest order of chivalry in the Realm as well as being the the first holder of the top three legal posts in the country.
The following tribute perhaps best sums up the Lord Bingham's general contribution to English law. On the Supreme Court website the Lord Hope, Deputy President of the Supreme Court of the United Kingdom on behalf of the Justices of the Supreme Court noted:
“The debt we owe to Tom Bingham, the greatest jurist of our time, is immense and incalculable. It is to him, perhaps more than anyone else, that the Supreme Court itself owes its existence – something that he had long believed in and happily was realised during his lifetime. But his real legacy lies in the depth and quality of the many judgments that he delivered, especially during his eight years as the Senior Law Lord. His energy, his unshakeable grasp of principle, the clarity and force of his language and his strong sense of history shone through everything that he said and wrote. It is a tragedy that someone who still had so much to give should have died so early after his retirement when, at last, he had the time and freedom to do what he wanted. Our deepest sympathy goes out to his wife and family at this very sad loss.”
In terms of the Lord Bingham's contribution to the insolvency jurisdiction the following cases are of note:
The BCCI Saga
The Lord Bingham chaired the enquiry into the collapse of BCCI between 1991 and 1992. As one obituary writer has noted the, "demise left creditors owed more than £9bn. His report, more scathing than anyone had predicted, criticised the Bank of England for its "deficient" supervision of the fraud-riddled BCCI and its regulation as "a tragedy of errors, misunderstandings and failures of communication"... Following the report, the bank's liquidators launched a case on behalf of thousands of BCCI creditors who were suing the Bank of England for its failure to properly oversee BCCI. The creditors sought £850m in damages, claiming that the Bank of England was guilty of misfeasance in public office. The case, however, collapsed in November 2005, with the Bank of England seeking to reclaim legal bills. The cost of the case to the creditors was reported to be as high as £100m."
Re EVTR Ltd (1987) 3 B.C.C. 389

This case relates to a receivership and the question of whether sums were the assets of the company or impressed with a trust for appellant. Bingham, LJ (as he then was) noted, "It would, I think, strike most people as very hard if Mr. Barber were in this situation to be confined to a claim as an unsecured creditor of the company. While it is literally true that the fund which he provided was applied to the stipulated purpose, the object of the payment was not achieved and that was why the balance was repaid to the receivers. My doubt has been whether the law as it stands enables effect to be given to what I can see as the common fairness of the situation. Our attention has not, I think, been drawn to any case closely analogous to the present. But the company certainly held the fund on trust in the first instance. The purpose for which the fund was paid out partially failed. The repayment to the receivers was a direct result of the company's original holding of the fund as trustee. The balance which was recovered may reasonably be regarded as not having been paid out at all. I am happy to be persuaded that the sums repaid are to be treated as held on the same trusts as the original £60,000 and, in present circumstances, on a resulting trust for Mr. Barber."
In Re Citro (Domenico) (A Bankrupt) [1991] Ch. 142
This is a bankruptcy case where the competing interest of the bankrupt's wife and the creditors were discussed. Bingham, LJ (as he then was) noted on appeal that "...As I read his [Hoffmann, J's] judgment, he treated In re Holliday as entitling or obliging him simply to balance the interests of the creditors against those of the wife, the creditors' prima facie entitlement to their money being simply one element in the scales - and not a particularly weighty one at that. I would willingly adopt this approach if I felt free to do so. It is in my view conducive to justice in the broadest sense and it reflects the preference which the law increasingly gives to personal over property interests. I do not, however, think it reflects the principle which, as I conclude, clearly emerges from the cases, that the order sought by the trustee must be made unless there are, at least, compelling reasons, not found in the ordinary run of cases, for refusing it. I find it impossible to reach that conclusion on the present facts, which I would expect to be substantially repeated in many other cases of this kind.
As I have, I think, made clear, I regret this conclusion. But we must apply the law as we understand it, and where authority has indicated how a discretion should be exercised in the unexceptional case it is desirable that it should be followed, unless overruled, if arbitrariness is to be avoided. I do not think we are free to overrule the authority relevant to these appeals, and indeed it would be improper given the terms of section 336(5) of the Act of 1986."
Other insolvency cases in which the Lord Bingham was involved include: