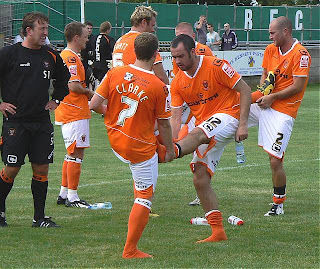 The Guardian are reporting that Blackpool FC's CEO, Mr Karl Oyston, was declared bankrupt on 18 August. Premier League rules stipulate that anyone who is made bankrupt is barred from holding the position of chairman or director of a football club. The Premier League are now investigating the affair. The story continues:
"Blackpool have been asked to provide details of Oyston's new role, in order to ensure that he is not acting as a shadow director.
A Premier League spokesman said: "We are speaking to the club to clarify his position in relation to his new role there and the full circumstances of the bankruptcy."
Blackpool refused to comment today. Oyston has said he will stay on as acting chief executive until the end of the season, or until a replacement is found. He is listed as such on the club's website.
The 43-year-old will be automatically discharged from bankruptcy on 18 August 2011, according to the Individual Insolvency Register.
Days before an insolvency court hearing, Oyston offered to step down as chairman of Blackpool because of his disillusionment with agents in football. He questioned whether he had the "right approach for this division".
Picture Credit: http://www.fyldesport.com/upload/2009/Burscough%20away%20064.jpg