Corporate Insolvency reform not on the back burner? A two pipe problem! 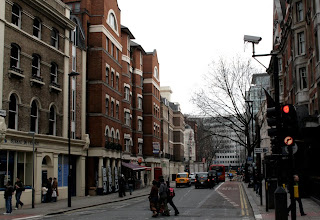 In last Thursday's blog post I mentioned that Accountancy Age were reporting that the "Tories" were abandoning their corporate insolvency reform proposals. Reuters seem to have a different take on things! They are reporting that the Insolvency Service (IS) policy makers in Bloomsbury (pictured) might be cracking on with the reforms after all. Here is an extract from the story:
"(Reuters) - The UK is edging closer to a radical shake-up in its bankruptcy laws [sic] which could reduce the risks of more failures like high street icon Woolworths, provided banks back the initiative.
Marking a big step away from the UK's creditor-friendly insolvency laws, the country has reignited plans to help shield companies from overly zealous creditors to stay afloat, mirroring the U.S. Chapter 11 regime model.
"If you take the most extreme end of the proposals and make them happen, you have radically moved the UK to the debtor side of the dial," said Ken Baird, head of law firm Freshfields's insolvency practice.
Insolvency experts believe the proposals -- welcomed by trade organisations, businesses and advisors -- are more likely to succeed than ever before, and the government might well decide to legislate the plans in late October. [???]
Corporate failures during the recession have been lower than many had feared, showing a 23-percent drop in larger company administrations -- standing at 777 -- in the second quarter from a year ago, according to the Insolvency Service.
...
But not all problems would be solved. Setanta, for instance, collapsed after failing to make payments to several football Premier Leagues, and its broadcasting licenses were ended.
A moratorium would not protect companies from such trade creditors turning the screws.
Still, it could be a speedier process than a standstill, an often lengthy affair which creates further financial instability and gives creditors a chance to dissent.
"Without this, creditors can sometimes break ranks and scupper management plans," said Tyrone Courtman from Midlands-based business advisory Cooper Parry and a board member of the Turnaround Management Association lobby.
While lawyers and trade bodies are likely to support the plans, the backing of banks will be vital.
"They have always had huge sway in these discussions and have successfully watered down previous proposals," said one source involved in the plans, who declined to be named.
A possible sweetener for the biggest banks would be that companies could be allowed take on emergency funding, already a lucrative business for banks in the United States, known as debtor-in-possession (DIP) funding.
Such loans -- which have only been used for small companies in the UK before -- often carry fat margins, or interest rates, of 1,000 basis points over Libor or more.
This was the case in one of the biggest-ever DIP loans of $8 billion (5 billion pounds) for Dutch chemical group LyondellBasell last year. There can also be arranging fees of up to 450 basis points.
On the flipside, DIP lenders are paid back first when a company recovers, pushing other creditors further back in the claimants' queue. That poses a risk for smaller banks without the balance sheet to provide funding.
"DIP financing has proven to be popular in the U.S. where it is an industry in itself," said Christian Pilkington, a partner at White & Case. "One key question ... is whether banks and other lenders can get comfortable that their secured positions in the creditor hierarchy will potentially be diluted."
Supporters of the debt moratorium hope there is greater political will for reform in the wake of the financial crisis, even if some elements are watered down.
The moratorium will be most useful in large-scale restructurings involving several layers of creditors -- like in the multi-billion pound loans backing the leveraged buy-outs of 2006 and 2007, analysts say.
"You have to have the right kind of problem -- this is not to help delay the demise of a company that's going to fall anyway," said Stuart Siddall, chief executive officer of the Association of Corporate Treasurers.
"But it can protect a company against small (creditor) claims that put pressure on it."
Picture Credit: http://upload.wikimedia.org/wikipedia/commons/d/d1/Bloomsbury_Street_London.jpg