Bankruptcy and insolvency issues in the UK Supreme Court 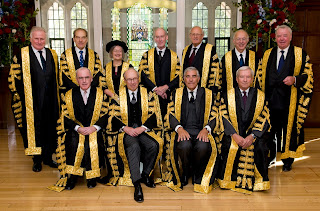 The Supreme Court has been operational for one legal year. So far we have had very few insolvency related cases passing through the interestingly carpeted corridors which may have caused the Supreme Court Justices (pictured - why is Baroness Hale the only on with a hat?) cause for deliberation. That is not to say they have not been very busy, a brief perusal of their current workload confirms that. Two cases do however touch, albeit briefly, on our subject. We will now consider the judgments (no longer opinions) and how they touch on the bankruptcy laws.
Roberts (FC) (Appellant) v Gill & Co Solicitors and others (Respondents) [2010] UKSC 22
This case concerned a claim by a beneficiary under a will for negligence against solicitors who, he claims, allowed his brother, also a beneficiary and then the administrator of the estate, to acquire and dispose of land which should have been part of the residuary estate. As the Lord Collins noted in his judgment, "The principal questions on this appeal relate to whether this is an appropriate case for a representative (or derivative) claim, which was the focus of the judge’s decision, and to the interpretation and application of section 35 of the Limitation Act 1980 and the rules of court which were enacted pursuant to it, first in the Rules of the Supreme Court, and now in the Civil Procedure Rules." The subject of bankruptcy arises at paragraph 66 of the judgment in the context of Lord Collins' discussion of William Brandt's Sons & Co. v Dunlop Rubber Co. Ltd. [1905] AC 454. In that case the Lord Macnaghten said (at 462): “Strictly speaking, [the sellers], or their trustee in bankruptcy, should have been brought before the Court. But no action is now dismissed for want of parties, and the trustee in bankruptcy had really no interest in the matter. At your Lordships’ bar the Dunlops disclaimed any wish to have him present, and in both Courts below they claimed to retain for their own use any balance that might remain after satisfying Brandts.” In paragraph 108 of his judgment the Lord Collins mentions our discipline again when he notes, "The cause of action accrues when the last building block of the essential facts is put into place. For reasons already mentioned the building blocks of the cause of action will not include its transmission (for instance on death or bankruptcy) after the proceedings have commenced, but they will (in the unusual case of a derivative action) include special circumstances relevant to the court’s willingness to entertain the case." It is at this point that our subject is left.
Inveresk plc (Respondent) v Tullis Russell Papermakers Limited (Appellant) (Scotland) [2010] UKSC 19
This case concerned a dispute regarding payments and sums in damages relating to the purchase of a paper brand. The subject of bankruptcy arises in the context of a discussion by the Lord Hope of the term "retention." At paragraph 32 he cites Gloag and Irvine, Law of Rights in Security (1897), p 303, which provides the following definition of retention: “Retention may be defined as a right to resist a demand for payment or performance till some counter obligation be paid or performed…The law on the subject is complicated by the fact that the word retention is used to denote various rights, widely different in their origin and extent. Thus the right of a party to withhold performance of his obligation under a mutual contract, if the counter obligation is not performed, is often spoken of as a right of retention, and may result in a right to retain money or goods.” The Lord Hope then goes on to state: "This use of the word is contrasted with the right of a creditor in bankruptcy to set off the debt owed to him against a debt which he himself owes to the bankrupt, which is said to be in origin a right of retention. As the authors explain at p 304, the law of retention of debts is an equitable extension of the statutory right of compensation under the Compensation Act 1592, c 143." The case of Ross v Ross (1895) 22 R 461 is also cited in the judgment, particularly Lord M’Laren's exposition of retention. He noted (at pp 464-465): “...but then there is another principle under which one obligation may be suspended until the performance of a counter obligation – the principle of retention, and that, not being subject to the conditions of any statute, must be regarded as an equitable right to be applied by the Court according to the circumstances of each case as it shall arise. The doctrine has received much extension in cases of bankruptcy and insolvency… But the principle is not limited to bankruptcy cases..." It is at this point that our subject is left.


Over the coming months we will monitor the case load to see if any insolvency cases come before Brenda and the Supremes (as my colleague Dr Darbyshire has christened the Supreme Court Justices).
Picture Credit: http://washingtonbriefs.files.wordpress.com/2009/10/ukjustices1.jpg